The Olympics weren’t always the celebration of world cultures you see today. Watching the hundreds of countries proudly waving their flags as they enter during the opening ceremonies.

At the 1904 Louisiana Purchase Exposition in St. Louis, Missouri the games hadn’t yet become the spectacle they are today. As Slate put it in a 2008 article, “Even in the U.S., the Olympics were seen less as an epochal sporting event than as yet another attraction at the World’s Fair.”

But in 1904, aside from the human zoos—exhibitions set up so fairgoers could gawk at Indigenous Peoples—that were on display at the World’s Fair, something else happened that made the games that year particularly troubling.

James E. Sullivan, the head of the 1904 fair’s Department of Physical Culture—a group meant to promote American athleticism, decided to have some of the Indigenous Peoples from the exhibitions at the fair compete in sporting events against white athletes as a way to prove white superiority. According to Slate, Sullivan called it the “Special Olympics,” but it was officially dubbed the 1904 Anthropology Days because Sullivan brought William McGee, of the fair’s Department of Anthropology, in on the action.

McGee, founding president of the American Anthropological Association, planned to collect data from the events that would prove the Indigenous People’s athletic inferiority, but the event was a farce. Pitting trained athletes against competitors who didn’t know the rules or understand them when they were explained in English—a foreign tongue—wasn’t exactly a fair scientific experiment.

To give an example of how badly it went, the indigenous competitors didn’t understand the concept of breaking through the tape at the finish line of the foot races: Some stopped short of the tape, others ran under it, Slate reported.

People from many places took part in the events including Africa, South America, the Middle East, the Philippines and Japan. Some did find the event to be in poor taste, including Olympics founder Baron Pierre de Coubertin. Years later in his memoirs, he said, “I mean the ‘Anthropological Days’, whose events were reserved for Negroes, Indians, Filipinoes and Ainus, with the Turks and Syrians thrown in for good measure! That was twenty-six years ago!… Now tell me that the world has not advanced since then and that no progress has been made in sporting spirit…”

One somewhat good thing can be said, the racist spectacle wasn’t well attended and because it was so poorly managed, McGee wasn’t able to get much data, so his findings of athletic inferiority weren’t proven as he’d hoped.

It’s hard to believe that just eight years after this racist display, Jim Thorpe, Sac & Fox, swept both the decathlon and the pentathlon, taking gold medals and setting world records at the 1912 One of the competitive events during the 1904 Anthropology Days was archery. One of the events during the 1904 Anthropology Days was throwing the javelin. 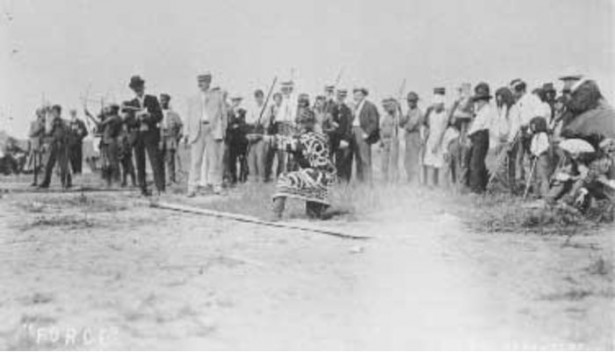 Ainu compete in an archery event during the 1904 Anthropology Days.

Thanks for sharing this information!

PITA SIKSIKA WARRIOR left a comment for 12Coyotes
1 hour ago

working on an arrangement of Madonna's « La Isla Bonita. » my phone actually captured the whole thing out of focus, but using the sharpening filter in Shotcut somewhat improved the results. the frets and strings appear seriously distorted though.…
yesterday
0 Comments 0 Likes