Lepidoptera in the Mythology of Native Americans

Because of the beauty, power of flight, and complete metamorphosis found in butterflies an moths, these insects frequently are found in Native American myths. In an early article, Grinnell called attention to the belief held by the Blackfeet that dreams are brought to us in sleep by a butterfly. Their sign for a butterfly was a design roughly in the shape of a maltese cross with one arm horizontal and the other verticle. This sign was painted on a lodge to indicate that the style and method of painting the lodge were taught to the lodge owner in a dream. It was also the custom for a Blackfoot woman to embroider the sign of a butterfly on a small peice of buckskin and tie this in her baby’s hair when she wishes it to go to sleep. At the same time, she sings to the child a lulaby in which the butterfly is asked to come flying about and put the child to sleep. Grinnell did not learn why or how the butterfly bring sleep and dreams. However, he did note that the Blackfeet stated that the butterfly is soft and pretty and moves gently and that if you look at it for a long time you will go to sleep.

The butterfly was also a prominent figure in the myth and ritual of the Hopi. This insect occurs frequently on prehistoric pottery, in a ritual “Butterfly Dance“, and a clan in one of the Hopi pueblos was even called the butterfly Clan. The spirit of the butterfly is also personified in Hopi kachina figures. Kachinas are the spirit essence of everything in the real world. They represent game, plants, food, birds, insects, and even death itself is given a kachina form. During sacred dances, men who impersonate kachinas present carved replicas of their kachina appearence to women and children. These figures are commonly called “kachina dolls”. Among the various insect kachinas are three of butterfly origin. These are Poli Sio Hemis Kachina (Zuni Hemis Butterfly Kachina), Poli Taka (Butterly Man), and Poli Mana (Butterfly Girl).

The sheer beauty of many butterflies is explained in a legend of the Papago. According to this myth, the creator felt sorry for the children when he realized that their destiny was to grow old and become wrinkled, fat, blind, weak etc. Hence, he gathered beautiful colors from various sources such as the sunlight, leaves, flowers, and the sky. These colors were put into a magical bag and presented to the children. When the bag was opened by the children, colored butterflies flew out, enchanting the children who had never seen anything so beautiful. Interestingly, the butterflies also sang which further delighted the children. However, songbirds complained to the Creator because they were jealous that butterflies were both so beautiful and could sing like birds. Hence, the Creator withdrew the ability to sing from butterflies. And, hence butterflies are so beautifully colored, but are now silent.

Born out of the caterpillar in the chrysalis, butterflies were a symbol of rebirth, regeneration, happiness, and joy to Native Americans in Mexico. In one legend, the powerful plumed serpent god, Quetzalcoatl first enters the world in the shape of a chrysalis, out of which the god painfully emerges into the full light of perfection symbolized by the butterfly. The Obsidian butterfly, Itzpapalotl, is a patron deity in the Aztec calendar. The Aztecs also believed that the happy dead in the form of beautiful butterflies would visit their relatives to assure them that all was well. These butterflies flew around the house and around bouquets of flowers which were carried by Aztec men of social rank. It was considered ill-mannered to smell a bouquet of flowers from the top. It should always be sniffed from the side, for the top was left for the souls to visit, where they could enjoy the fragrance thus reserved especially for them.

Native South Americans also integrated various Lepidoptera into their mythologies. To the Goajiro of Colombia, if a particular large, white moth is found in a bedroom it must not be mistreated for it is the spirit of an ancestor come to visit. If the moth becomes troublesome, it can be removed only with the greatest care or the spirit may take vengeance. Among the Aymara of Bolivia, a certain rare nocturnal moth was thought to be an omen of death.

Numerous other examples of Lepidoptera in the mythology of Native Americans exist beyond those documented in this article. Lepidoptera have also been popular in myths among other aboriginal people around the world. Many of these myths are found in anthropological sources and have yet to be fully brought to the attention of entomologists. 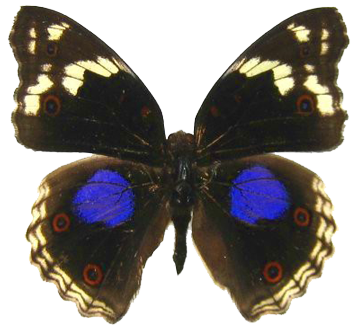