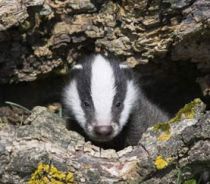 Adult badgers measure 30 inches (76cm) to 35 inches (89cm) in length, including a short furry tail averaging 5.5 inches (14 cm) . Their bodies are wide and give a flat backed appearance. Many adult badgers weigh 12 pounds (5.4 kg) to 16 pounds (7.3 kg), although weights might increase to over 20 pounds (9.1 kg) in the late fall as they store up layers of fat to sustain them during periods of cold weather and deep snow.

Colors are mostly gray, with a grizzled effect due to long guard hairs that have a black band ending in a white tip. Their "underfur" is either a light tan, or a creamy white. A white stripe from the nose leads between the eyes and back over the head of the badger, ending between the shoulders.

Ears are set low along the sides of the head. Lower legs and feet are black in color. There are five toes on each foot and four of the toes on the front feet have exceptionally long claws of up 11/2 inches (3.8 cm) to 1 3/4 inches (4.5 cm ) in length.

Badgers have 34 teeth, including four sharply pointed canine teeth. All badgers have a pair of musk producing glands near the anus as well as two skin glands located on the bellies. Badgers walk on their toes (digitigrade) with a characteristic rolling gait. 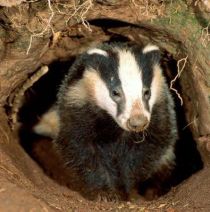 Male American badgers become sexually mature as yearlings, but 30 percent of females have been found to breed in their first year, when only 4-5 months old. Badgers mate in August or September. Embryos of the badger experience an arrest in development that greatly prolongs gestation. The embryo develops for a few days, then lie dormant in the uterus, being implanted in January. Of the total gestation period of 250 days, growth occurs during only 50. Birth is usually in April, or perhaps as late as June at higher altitudes. Usually 2 to 7 young are born. Although the female has 8 teats, litter sizes tend to be small, and a litter size of 3 is common. Females care for the litter by themselves. The young badgers move out in late summer to begin solitary lifestyles. 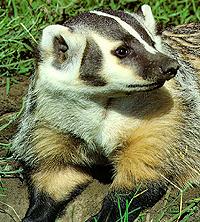 Badgers are territorial throughout most of the year. Most territories are about 3 or 4 square miles (4.8 to 6.4 square km). The size of the territory might vary somewhat due to the availability of rodents, a preferred food. It seems as if territories are not defended against other badgers, or territories overlap regularly in good habitats. Habitats with sandy or porous soils are preferred. Badgers frequent wooded areas when soils are suitable for digging. Other than the dispersal of juveniles, badgers do not seem to emigrate. Typically walking from place to place, they can trot or bound along at a gallop when they chose to. They are mostly nocturnal creatures, but have been known to be active during daylight in quiet areas.

Badgers have excellent senses of hearing and smell. Both serve in locating food species, which are usually rodents in underground dens. Badgers have been known to plug the exit holes of prey species before the badger tunnels underground to capture the prey. The long claws serve to loosen the soil and pass it backwards where the hind feet kick the soil out behind the digging animal. This dirt is often kicked backwards 6 to 8 feet (1.8 to 2.4 meters) in an almost continuous arc by a badger digging in earnest. Badgers close their eyes as they dig underground. They rely upon smell and hearing to continue digging towards the prey.

Even though Badgers have relatively small territory zones, a number of dens are used regularly over different parts of the territory. These underground dens are quite often elaborate. Most tunnels are 6 to 8 feet 1.8 to 2.4 meters) deep and 20 to 30 feet (6.1 to 9.1 meters) long to the main chamber which is elevated to discourage flooding. A smaller chamber s also dug underground to serve as a toilet area, and many dens have several entrance holes. Dens that have been used for generations by badgers may have as many as 30 to 40 exits, and tunnels as deep as 15 feet (4.6 meters). Bedding grass and leaves are sometimes removed from the den chamber for airing out by a den entrance, after which it is taken back down into the chamber for reuse.

Some badgers have demonstrated that they will tolerate a fox or coyote sharing the same den. In 1871, a lost Canadian boy shared a den with a badger, which at first tried to drive him away, and then appeared to adopt him by bringing him food. 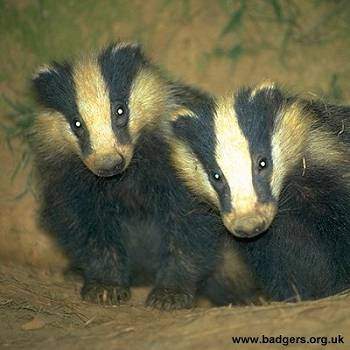 Badgers are determined fighters when they are threatened. They have loose fitting skin, which prevents them from being held securely by another animal.

Badgers do not hibernate like bears during winter, but they do sleep for extended periods of time in northern states. Especially during extended periods of cold weather and deep snow. Wintering dens can sometimes be found in woodlands, where the frost does not penetrate as deeply. They can stay underground for weeks at a time, but they come out to hunt occasionally as they do not store food.

The American species is the most carnivorous of all badgers, digs out chipmunks, ground hogs, ground squirrels, mice and rabbits; it will eat carrion and invertebrates and also caches food. Rattlesnakes are eaten when a available but the badgers do not eat the rattlesnake head. Carrion is probably an important winter food when the frozen ground is difficult or impossible to dig in.

The condition of it's claws are important to a badger. The species sharpens their long claws by scratching on trees or posts.

A badger is considered to be old at 12 years of age.

Badger tracks are easy to spot, due to the long claw marks left by the front feet. Stride distance between tracks on an adult male are usually 9 inches to 10 inches (22 cm to 25 cm) apart.

The green area shows where badgers are commonly found in all of the western and north central states and their range has gradually extended eastward over the years. This species is rarely found in the southwest.

Fact - The badger is the fastest digging animal on earth, and the strongest for its size. An American badger in the midwest was observed digging through the asphalt surface of a parking lot. It took him less than two minutes to disappear completely!

Myth - Badger's won't chase you for wearing Levi Cords, like their TV commercial portrays. But.... in one case an American badger was reported to join some joggers for a distance of about 164 feet (50 meters).

Fact - Badger's have been known to partner up with other species, and sometimes even share the same burrow. Most common in England is badgers and foxes, in the U.S. it is the coyote and the badger, and on the island of Palewan it is the porcupine (ouch).

Myth - In medieval times it was said that if a badger crossed behind you on the path you had walked it was good luck. But... if it passed in front of you, it was bad luck. For REALLY bad luck, if it stopped and scratched the earth on the path in front of you, that you were bound to die soon.

Fact - Eurasian badgers are known to "scent" trees and fence post from 12 to 16 inches (30.5 to 40.6 cm) up the wood by doing hand stands. Then they rub the scent glands in their anus against the tree or post.

The diferent speises of Badgers 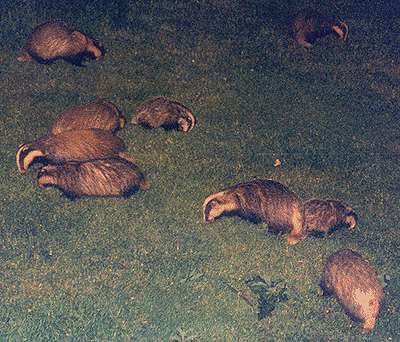 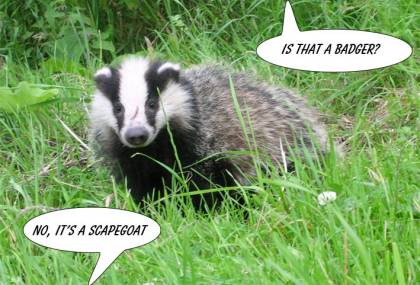 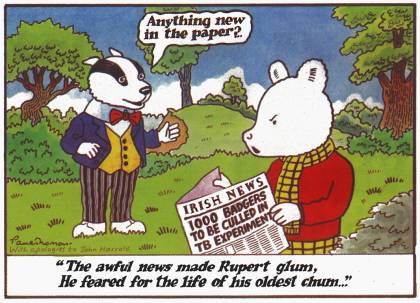 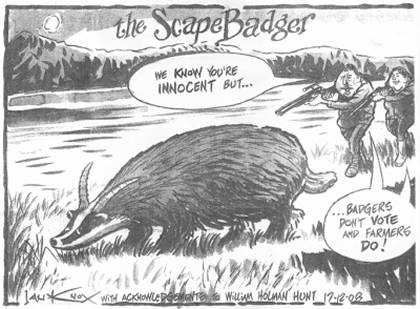 bridget orman left a comment for Susan Hamilton
46 minutes ago