Kiowa -our Wood Bison has gone to his spirit lodge

Moonridge Animal Park has lost one of our longest residents, our Woodland Bison Kiowa. Cause of death: Old Age

Kiowa was a very special animal and will be deeply missed.

Kiowa was born at the Moonridge Animal Park in May of 1992. His father Cochise came to us from the San Diego Zoo along with two females and another male. Cochise lived to be 16 years old, but his son Kiowa lived to be almost 20! Kiowa is survived by his half brother Norman who is about a week older than him. They had the same father but different mothers. They could not have been more different in temperament. Norman has always had an attitude and is very aggressive. Kiowa was sweet and gentle and everyone that knew him loved him. The fallow deer in the exhibit surrounded him on his last night and slept with him, keeping him warm. Kiowa passed this morning at 11:00am surrounded by the Moonridge Animal Park Curator and the keepers - the people who loved him most.

Just so you all know...Kiowa had a good home for all these years and was educational to tens of thousands of people who got to see him. To honor him today was a great gift...he will be missed for sure....

Comment by LadyHawkღ on September 17, 2011 at 4:55pm
I'm sure you gave him a wonderful send off. I know he was a close friend and great gift to you.
Hugs,
LadyHawk 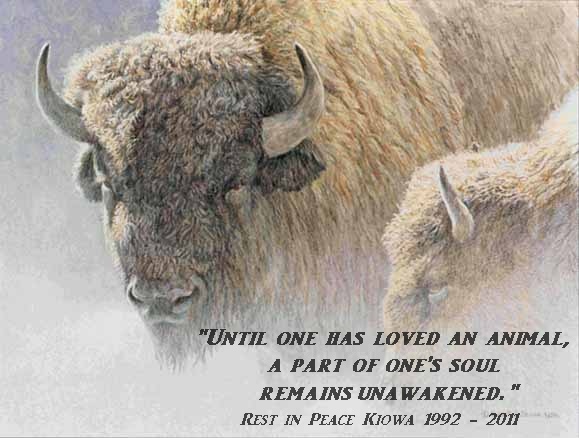 WILLA NYOKA (ADMIN) left a comment for Val
1 hour ago

WILLA NYOKA (ADMIN) left a comment for Eckart
1 hour ago