In RE: Pow Wow Originations

He' :
I do not wish to seem like I think I know it all, this is just what I understand and have been taught over my years, and since I was 18 I heard only this story about the origination of the Pow Wow.
It was told to me by the Algonquin people of Canada that the words Pow Wow come from their language , and is Pe'Wau E' Wau , pronounced Pehhh-wahhh Eeee-Wahhhh. The Council of the Nation that the people who told me this said also that the Pow Wow, or Pe'Wau E'Wau , is originally a Medicinal and Healing Circle and Ceremony . It was to celebrate medicine and it's healing , to celebrate the Elders and Ancients and their teachings. In accordance to them , now , only as I was told, the origination of this started with the original peoples of the Algonkween or Algonquian people of Eastern to Mid Canada, who were known way back when as Algonkins. It was their ceremonies and belief system it supposedly came from. But then again , we all have our renditions of this, as my own people, the Lenni Lenape have their rendition of it as well, saying that the Lenapis (Lenape) who crossed the Bearing Strait brought it with them, and it was not the Pe'Wau E'Wau it was to them the Pinau Eskwae ( Pin-Ah-ooo Essss-k-way) and was the Creation Circle Ceremeony. So who really does know, I do know I don't. I would love to find out that it was just one and it was a certain people's and it's exact meaning. However, I have the feeling that is impossible, because it came from too many roots and too many peoples as Tribal Nations.

Just thought I would add this and let people know. It's not like I think I'm 100% right and now one else is...just interesting to note, that for a ceremony that I originally heard one way when I was 18 , it evolved into having multiple origins including, yes the Pawnee version as well .
Well , I leave it up to the individuals everywhere to choose the way they think it evolved and if they're fine with that for themselves I am happy for them and I choose to believe the way I believe. That's what makes us such a diverse, and happy family... and yes I said FAMILY. We are brothers and sisters in the world and this is what binds us together....diversity, acceptance, love and Honor.

To this I say
Taho, and Wanishi
Blessings to all my Family

Grandfather...you were fine. You spoke basically the language many Lenape Nations use now a days, when I say now a days I mean since the last changing of their language in or around the year 1778. (ish! ha ha) . As far as my words I can only repeat the words of my teachers and hope to Creator they were correct so it makes me correct ( tee hee) . As I said, I speak the generalized "Algonquin" language a little, mainly my particular people's original language. My people are of the Earth or North People, original people crossing the Strait. I do not speak Mongolian, only the very Mongolian sounding Lenape or as they were known when crossing Lechtisis Lenapis (which literally translated means "Real People Of The North.") . My people came from the Ancestral loins of some of the fiercest warriors, kindest people, the most leading diplomats of their area and time and were also known as the areas humorists. You can't tell I have their blood in me can you ? ( ha ha) . Love and Blessings.

Oki My Brother White Eagle, Wado for you kindness and friendship, I am truly honored to call you my Brother. Did I do justice to your people when I said Aho Alton? I remeber some of the Lanape language, but it have been about 25 yrs since was able to use it... anyway Many Blessings and again thank you so much for your friendship..and to everyone here..Many Blessings GWB 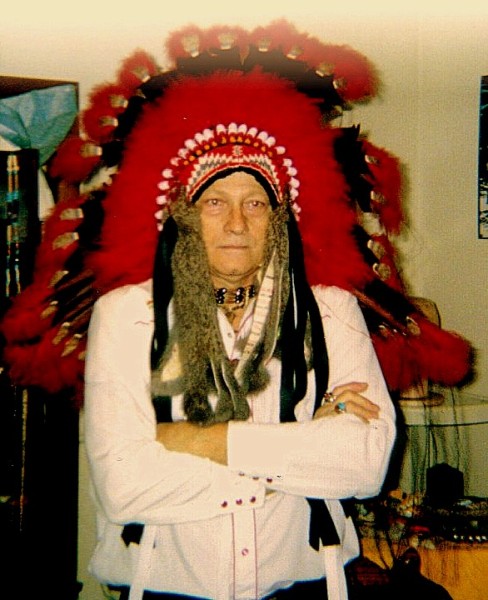 Granddfather White Buck:
Wanishi, Many Thanks ... for the kind words. Yes, I do speak the Algonquin Lenape Language some . I have been taught in the past our origination language which if you were to listen to it and listen to Mongolian, it is very, very similar. This is why so many in research believe the Legends of Lenape Crossing the Bearing Strait. That is the language I know most. I don't know all the original language, but I can definitely make it by in conversation ....barely !

Thank you for the great write up! Sadly, many traditions cannot be traced back to the origin of who and why. Not only for the Native American tribes but many of the European traditions as well.
These words should be framed..."We are brothers and sisters in the world and this is what binds us together....diversity, acceptance, love and Honor."

Oki David White Eagle Merchant. Blessings to you for sharing your stories and your thoughts I too have heard this same story from some Iroquis and Eastern Woodland Poeple that I have know., in the Language of your people Aho Alton, (to love one another) Many Blessings of Love, Light and utmost Respect Grandfather Whitebuck (Blackfoot/Crow) ps I learned some of your language as a young lad while in Boy Scouts and we learned about the ledgend of The Last of the Mocicahn ...excuse the spelling please, and the stories of Unkas and other Lenapis (Lenape) of the Deleware..do you still speak the language or is it true that I heard, there are very few Native speakers anymore, as is sadly the case with a lot of our languages...again , Many Blessings GWB