Native Americans May Have Traveled To Easter Island

A new study published in Cell Biology on October 23rd points to strong genetic evidence that native Americans traveled to Easter Island six or seven hundred years ago. The study undertook a genome-wide analysis of 27 native Rapanui, and confirms significant contact between the natives of Easter Island and Native American peoples sometime between AD 1300 and AD 1500, around 19 to 23 generations ago.

Of note, the Rapanui population did not start mixing with European populations until around the middle of the 19th century. The genetic ancestry of the Rapanui today is 76% Polynesian, 8% Native American, and 16% European.

Earlier archaeological studies have theorized that somewhere between 30 to 100 Polynesian men, women and children first came to Easter Island, also known as Rapa Nui, around AD 1200, traveling in at least two doubled-hulled canoes. The Rapanui began building their famous stone platforms and more than 900 statues around a century after they arrived.

Archeologists note that despite the fact it would have taken Polynesians several weeks just to reach nearby islands, it appears the Rapanui natives had contact with the outside world. One strong piece of evidence is the presence of native American crops in Polynesia, such as the Andean sweet potato, well before known European contact.

This new genetic evidence about the Rapanui implies one of two possibilities: either Native Americans sailed to Easter Island or native Polynesians sailed to the Americas and back. Although there is no conclusive evidence, the researchers believe that the Rapanui probably made the trip back and forth to the Americas as simulations in prior studies showed that “All sailing voyages heading intentionally east from Rapa Nui would always reach the Americas, with a trip lasting from two weeks to approximately two months.”

Moreover, the trip from the Americas to Rapa Nui is much more difficult given currents and typical weather conditions, which make it easy to miss the island completely. By the same token, Easter Island is a small target compared to North and South America. 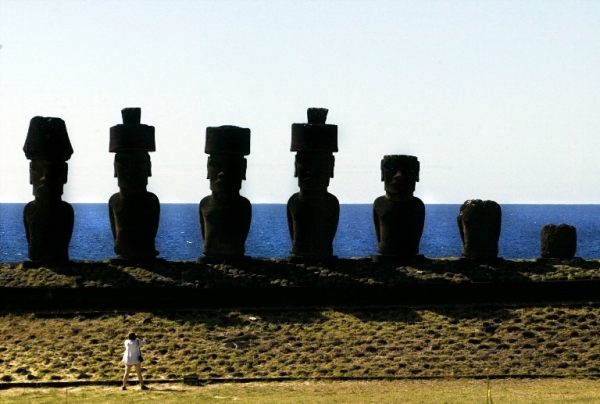 Thanks for sharing this information