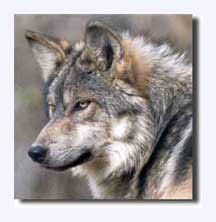 The Mexican gray wolf (Canis lupus baileyi) is the southernmost and most genetically distinct subspecies of the North American gray wolf. From prehistoric to fairly recent times, the Mexican wolf, or “lobo,” ranged from central and northern Mexico to western Texas, southern New Mexico, and central Arizona.

Our knowledge of the Mexican wolf is sketchy because wild populations were effectively eliminated before they could be studied. Most of our information about the animal in the wild comes from trapper’s journals and reports. Adult Mexican wolves typically weigh 65-85 pounds, average 4.5-5.5 feet from nose to tail, and stand 28-32 inches at the shoulder. They breed from late January through early March, and give birth to an average of four to six pups about 63 days later.

Mexican wolves were found in a variety of southwestern habitats; however, they were not low desert dwellers. They preferred mountain woodlands, probably because of the favorable combination of cover, water, and available prey (deer, elk, javelina, rabbits, and small mammals). Like all wolves, the lobo is a social creature with an intricate system of communication and social structure. However, because the primary prey of Mexican wolves is smaller than the moose and caribou hunted by northern wolves, wolf pack sizes were probably smaller as well. A typical pack of five or six animals might consist of an adult pair and their offspring, with a territory encompassing up to several hundred square miles. Hunting behavior and strategies would vary with terrain, and prey size and availability. Wolves can and do occasionally kill livestock, particularly vulnerable young animals. However, in areas where wolves and livestock coexist, such as Minnesota, Montana, and Alberta, Canada, wolves take an average of less than one-tenth of one percent (0.1%) of available livestock.