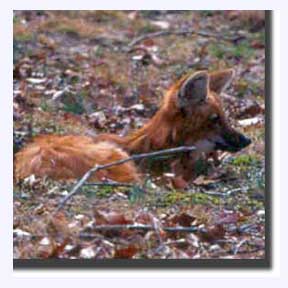 Natural History
The maned wolf ( Chrysocyon brachyurus ) is one of the most distinctive canids in the world. Although it is not a true wolf, it has an evolutionary history dating back six million years, to a time when many large canids became extinct in south America. It is not closely related to any other canid alive today, being the sole member of the genus Chrysocyon.
Chuck Dresner
Its long slender legs, large ears and a reddish coat have given this species the nickname: "a fox on stilts." Native to the dry shrub forests and savannas of South America, their long legs give them an advantage while hunting for prey in the tall grasses found in these habitats.

The legs of the maned wolf are so long that its height is greater than the length of its trunk. Average height is 29 to 34 inches at the shoulder with a combined head and body length of 49 to 52 inches. Average weight is 51 pounds. The back legs are slightly longer than the front, therefore negotiating downhill slopes is awkward, yet uphill slopes are a breeze. Since their long, slender legs are not good for digging, maned wolves use their teeth to dig out rodents from burrows.

Their unusually large ears provide the maned wolf with a keen sense of hearing, which is necessary when hunting rodents and other small mammals amid the tall savanna grasses.
The size of their ears allows body heat to dissipate which can be very beneficial in the tropical temperatures of South America.

The pelage of the maned wolf is chestnut in color with black erectile hairs along the upper portion of the back and neck, which form a mane, giving the species its name. White patches occur on the throat, underside and inside the ears.