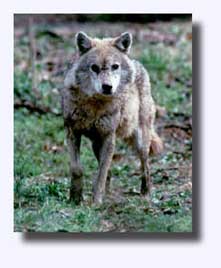 Joel Satore The Iranian wolf (Canis lupus pallipes), prominently featured in popular literature such as Richard Kipling's, The Jungle Book, once ranged from the Middle East across Asia. This beautiful and unique animal is also referred to as the Indian or Asiatic wolf.

A subspecies of the gray wolf, the Iranian is smaller than its counterparts in Northern Europe and America. Standing 18 to 30 inches tall at the shoulder, Iranian wolves weigh between 55 to 70 pounds.

The short, pale color of their fur helps them to blend into the semi-arid landscape that they call home. Little or no undercoat keeps them cool in the hot climate of the Middle East.

Despite the differences that exist among different populations of Iranian wolves, they are unique from other subspecies of the gray wolf in their overall small body size, light pelage, habit of hunting small animals, and the fact that they apparently seldom howl.

Iranian wolves prey on a variety of small mammals including hares, mongooses, rats, squirrels, and ground birds such as partridges, quails, jungle fowl and lapwings.