The Original People: The Story of the Lenape Indian 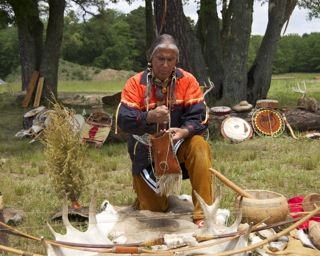 Greg Vizzi has collaborated with Richard “Quiet Thunder” Gilbert to produce a book about the Lenni Lenape Indians. It's called: The Original People, The Story of The Lenape Indians.

The Lenape's were one of the first Indian tribes to make contact with the Europeans. The Treaty of Peace and Brotherhood was made between William Penn and the Lenape Indians. This was a verbal treaty and the first one between the colonists and the Indians in North America.

Quiet Thunder is a Native American elder from Woodbury, New Jersey and a chief of the Lenni Lenape tribe. He is a traditional Indian, but happy to share his culture with audiences of all ages. He gives many presentations in the schools and other venues for the general public.

The Original People is based on many hours of video and audio interviews, recorded conversations and stories by the chief. The book is written for the most part, in his own words and point of view. He speaks about the Lenape Indian culture and traditions. He tells personal stories of his life growing up and how he became an educator, teaching people about his culture and traditions.

He brings dozens of hand-crafted cultural items to his programs and if you attend you may get to hold a stone ax, arrow or bone knife made by the chief. Quiet Thunder infuses his talks with colorful scenes from the past as he takes you on a journey to America before European contact. His audiences are often held spellbound by his stories. His classroom presentations are very "hands on" for the children. He engages the very young by giving them drums and rattles to play and puts animal skins on the "hunters" as if they are members of the tribe.

Excerpt from the introduction to The Original People and The Seventh Generation by Chief Quiet Thunder:

“I am fortunate to know many of the traditional ways of the Lenni-Lenape. The name Lenni-Lenape means “Original People.” For many years I have talked to groups in schools, churches, parks and other public settings. I decided I wanted to get down in writing the stories and history that I’ve shared verbally over the years. My original goal was to pass on to my children and grandchildren the important spiritual beliefs of their ancestors and help them remember me. If I can also help other people gain a better understanding of the native people of North America, then this book will exceed my goals.

Mother Earth is the giver of life and the protector of the spirit after life, for all people, not just the Indian people. We have a sacred obligation to protect the earth, and to learn to live in harmony with the earth. The Indian people of North America were forced to give up their religion and way of life for many years, to the point where much has been lost. I developed my beliefs through time spent in the wild, talking to elders and maintaining the traditional ways.

Beyond giving my children something to hold onto when I am gone, I want to help keep traditional Indian spirituality alive by teaching Indians who have lost touch with the past, and non-Indians who can use these ideas to strengthen their own lives in the modern world. The Lenape believed that each person makes their own connection and establishes their own spiritual beliefs, using the beliefs of their ancestors as a starting point.

This book combines an oral history of my people, their way of life and spirituality. It also contains some of my personal life story and beliefs as a Native American in the modern world. I believe the Creator has selected me to express and teach these ideas and ways of life, not only for Indian people, but also for all people willing to listen. I have seen that people are becoming more receptive. They are seeing that there needs to be more to life, and that they can learn by looking at how others have lived on this earth. In my presentations I try to do more than simply entertain people with colorful outfits and trinkets. I try to pass on ideas that meant something to my family and my ancestors, ideas that still have significance today.”