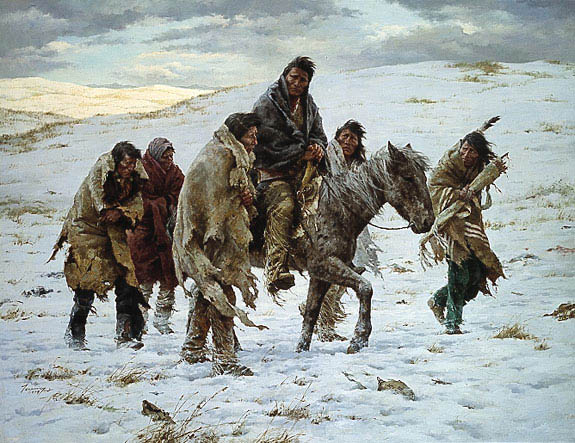 They were given the name "Nez Percé" by the French because some of them wore nose pendants; however, this custom does not seem to have been widespread among them. They were typical of the Plateau area, fishing for salmon and gathering camas, cowish, and other roots. After the introduction of the horse (c.1700) they became noted horse breeders, particularly of the Appaloosa, and they adopted many Plains area traits, including buffalo hunts.

In 1805, when visited by Lewis and Clark, they were occupying a large region in Western Idaho, North Eastern Oregon, and South Eastern Washington. In the 1830's the Nez Percé, then numbering some 6,000, attracted national attention by sending emissaries to St. Louis to ask for books and teachers. Their request attracted to the Pacific Northwest missionaries, who played an important role in opening the region to settlement. The Nez Percé ceded (1855) a large part of their territory to the United States. The gold rushes in the 1860s and 1870s, however, brought large numbers of miners and settlers onto their lands, and a treaty of cession was fraudulently extracted (1863) from part of the tribe, confining the Nez Percé to a reservation in North Western Idaho. A band of the tribe living in Oregon refused to relocate, leading to the uprising under Chief Joseph in 1877. Following their defeat, many of the survivors ended up at the Colville Reservation in Washington, where some of their descendants still live. However, many more Nez Percé live on their reservation in Idaho, earning their living as farmers. In 1990 there were some 4,000 Nez Percé in the United States.