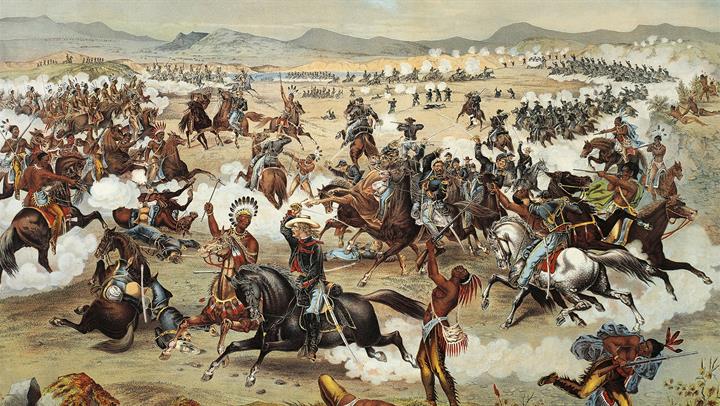 Dozens of native nations lived on the Great Plains including the Sioux Indians, also known as the Lakota or Dakota. The name Sioux means "little snakes". These Native Americans were nomadic and occupied territory in Minnesota, Wisconsin, and North and South Dakota, however they were also known to live in parts of Nebraska, Illinois, and Montana.

Sioux people were farmers, hunters, and gatherers. They farmed corn and gathered fruit and berries. Once the Sioux had access to horses in the 16th Century; their diet was predominantly buffalo meat since they were then able to keep up with the buffalos migration patterns. Their diet also included elk, antelope, turkey, and deer meat.
The Sioux are known for their distinguished looks. Their hair is very black and it is worn long. Like other Native American tribes, they also have high cheekbones and large noses.
The Sioux Indians have the distinction of having one of the most well-known Indian chiefs in history. Sioux Chief Sitting Bull was a holy man and a great leader. He was recognized early in his life for his bravery after going to war at the young age of 14. He eventually went on to lead his people to defeat Custer in the Battle of Little Big Horn in 1876. This was also known as Custer's Last Stand.
In the last battle of the American Indian Wars, the Battle of Wounded Knee (1890) over 150 Sioux Indians, including women and children, were killed. Some estimates say that number is closer to 300.
The Sioux are known for their powwows, which is a ceremony held at the same time each year featuring dancing, singing, and lots food.

The Sioux men made Buffalo-hide paintings that were quite elaborate. The women were best known for their bead art, sometimes in the form of jewelry and sometimes used in embroidery. They were also skilled at quill work and pottery.
As in many Native American tribes, the Sioux men were responsible for providing food for their families and protecting them from harm.
The women took charge of the children and domestic life, including cooking, cleaning, and breaking down and rebuilding their homes, or tipis (teepees) whenever necessary.