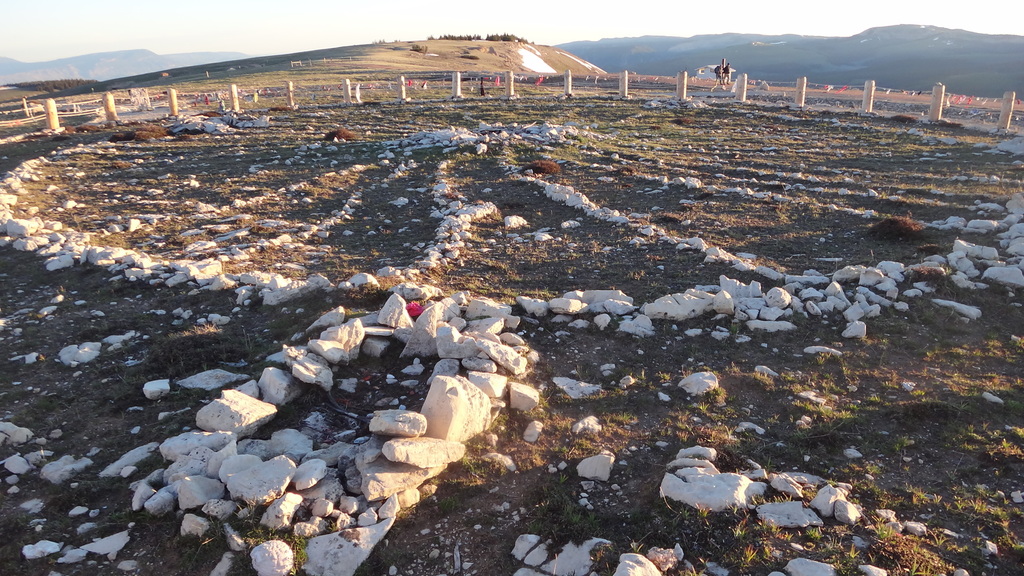 Permalink Reply by Sharikee on July 24, 2015 at 2:04pm
The Mystery of the Big Horn Medicine Wheel
Its Reality Speaks of a Culture Long Gone, Lost to Time, Attuned to the Stars

Located high in the Bighorn Mountains of Northern Wyoming, the centuries-old Medicine Wheel, as it is known today, seems to be a testament to astronomical applications used by people who lived in the Northern Plains long before white men came on the scene, or even the Crow Indians, but the structure remains as mysterious as Britain's Stonehenge.

The Bighorn Medicine Wheel sits at nearly 10,000 feet above sea level near the summit of Medicine Mountain, on a ridge offering incredible vistas. The Wheel can typically only be reached by human visitors during the warm summer months. Constructed of stones gathered in the vicinity of the landmark, the Medicine Wheel has a diameter of 80 feet (245 feet in circumference), with stones piled inside to form a central, donut-shaped cairn about 12 feet in diameter and two feet high. Twenty eight stone “spokes” connect the central cairn to the outside circle, and around the circle lie six other stone cairns, some large enough for a person to sit in.
The 28 spokes probably correspond to the 28-day lunar cycle, but the number 28 seems to also fit into another part of the astronomical puzzle. The six cairns arranged around the Wheel are definitely related to the night skies. Two of the cairns, when lined up with the center cairn, mark the rising and setting Summer Solstice sun. Cairn pairs also line up to show the once-yearly heliacal, or dawn risings, of certain stars in the summer. The heliacal rising of a star is the day a star can first be seen just before dawn, after being behind the sun for a whole season, thus pinpointing the corresponding date. Four stars figure in these observations: Fomalhaut, 28 days before the Summer Solstice, Aldebaran, rising the two mornings just before Solstice, Rigel, 28 days after Solstice, and Sirius, rising 28 days after Rigel's pre-dawn appearance.

Estimates regarding the age of the Bighorn Medicine Wheel vary, with 1200 A.D. being the time period when the star alignments with the cairns were most accurate, according to Jack Robinson, the last archaeoastronomer to publish on the wheel. Slight changes in the earth's orbit since then have resulted in a not-so-perfect astronomical fit star-wise, but the solstice alignments are still accurate today. With certainty, it is known that the wheel dates to before 1600 AD, because it was at the wheel where the Crow first arrived and a vision quest at the site caused a Crow leader to realize they had found their homeland.

The central cairn of the Wheel, which may have supported a large wooden pole, is thought to be the oldest part of the structure; it extends below the wheel and wind-blown dust and debris have buried much of it. A bison skull has often been placed on the center cairn during Native American ceremonies.

Different groups of Native Americans have utilized the Bighorn Medicine Wheel and other areas of Medicine Mountain for ritualistic purposes over the centuries and continue to do so today. An anonymous Cheyenne elder of the modern era said that “The tribes traditionally went and still go to the sacred mountain. The people sought the high mountain for prayer. They sought spiritual harmony with the powerful spirits there. Many offerings have been left on this mountain…prayers of thanks were offered for all of creation. All of this is done so that spiritual harmony will be our constant companion throughout the year.”

While some Crow people believe the Wheel was built “before the light came,” other Crow legends have the Sun God dropping the Wheel from the sky. And some Crow people believe the arrangement of stones was laid down by a Shoshone band known as the “Sheepeaters.” But whoever built the Medicine Wheel left no clue to modern investigators as to its exact use. Today practitioners of New Age religion as well as Native Americans are drawn to the site of the Medicine Wheel for ceremonial purposes.

The Bighorn Medicine Wheel was added to the National Register of Historic Places in 1969, and last year the site was expanded and renamed the Medicine Wheel/Medicine Mountain National Historic Landmark. The additional 4,000 acres also contain significant Native American sacred areas, some of which are intact.

Permalink Reply by Michael Matthew Flynn on July 24, 2015 at 10:17pm
I have a 128 stone Medicine Wheel tat I was directed to build in Indiana in2006 it is 128 stones and has traveled witn me to Texas and now to Tulsa Oklahoma it has many powers and offers healings and guidance to all that enter. It is a intricate part of my practice as a spiritual healer. I blessed for having this power in my life...Blessings to you and may Creator offer further blessings to you. Michael