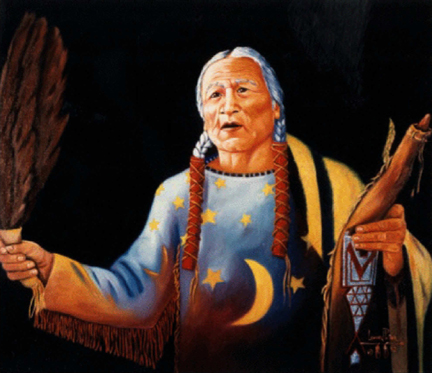 Permalink Reply by Sharikee on November 16, 2015 at 3:26pm
Coming Home
Long ago before the Comanche had the horse or the gun, winter was very hard on the people. Deep snows hid the tracks of the animals and made it hard for the hunters to travel. It was especially hard when the snows came early.

So it was the winter that the snows came before the leaves had fallen from the trees. The people did not yet have sufficient stores laid in, and the elders would only shake their heads when asked what was to be done. Soon it was apparent that many would not survive to see the spring.

Every day the hunters would set out in the darkness of the early morning. And late each evening they would return with empty hands; half-frozen and exhausted from pushing their way through the ever deepening snow. Yatenah`te was always the first hunter to leave and the last to return. Being the youngest and strongest of the hunters, he pushed himself to go farther and to stay out longer than anyone else.

At first Yahtenah`te hunted the plains surrounding the camp. Then he journeyed to the foothills. And finally entered the Witchita Mountains in his search for game to feed his people. And so it was that he became lost.

Yahtenah`te tried to retrace his steps but the wind and snow had covered his tracks. He tried traveling North, South, East and West in hopes of finding a landmark that would lead him back to the village. But no matter which way he went, he remained lost. Days turned to weeks and weeks into seasons. As the years passed the memory of his village never left him, and he searched first one valley and then another in hope of finding the way back.

One day Yahtenah`te sat by a stream looking at his reflection. His hair had now grown thin and white and his weathered face was wrinkled with age. As the thought on his life alone, he noticed to his amazement that the lines and creases on his face matched the hills and valleys of the mountain. He searched the furrows around his eyes and saw the summer range of the mule deer. In the creases of his chin he saw the steep bluffs of the central range, where he had lured many bison to their death for food and hides. Then he noticed a line he did not recognize from the terrain. Wondering if this was a place he had never seen before, he collected his weapons and set out.

Early the next morning he reached the mouth of a broad, shallow ravine that he had never seen before. As he followed it, he could hear distant voices. And on the wind he was sure he could smell the smoke of a cook fire. Turning a bend in the ravine he saw his village in the distance. Painted teepees. Children running and laughing. Men tending and repairing their weapons. Women preparing food. He knew in his heart that this was his village.

Yahtenah`te paused. He thought of his years alone. Of his journeys in the mountains. Of how the Fingerprints of the Creator are upon us all. And how we are each given all the gifts we need in this life. Raising his arms to the sky, he gave thanks to the Creator. And returned Home.

There is a great message here for all of us as so often we set out with good intentions and sometimes lose our way. The winds of change covered the footprints of Yahtenah'te and they often do with ours. The most important lesson I see here from walking this earth many, many seasons, is that when he looked into the stream (or his mirror) his truths were reflected... he found his way home.
Always it was told to me to look into a still pond, or today a mirror.... see the beauty there, but also see that there are no lies spoken with this reflection. Look closely at who we are, not what we 'think' we are. Our home is with family...that is the place of comfort and love and this site is family for many of us. May we learn from Yahtenah'te to find our way before we are so old that we no longer have the strength to travel.
Equa Wado Sharikee for re-telling the truths of our people. Always we are one... only our arrogant mind separates us from our family.