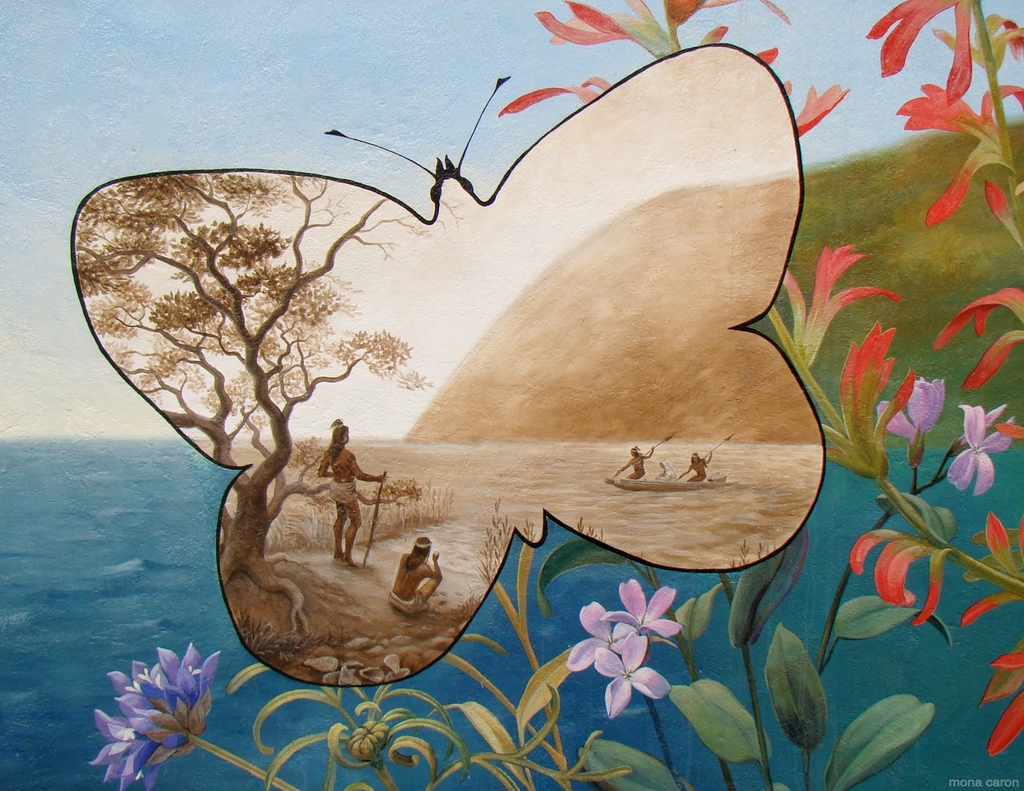 Many, many years ago when the Earth was still quite new, there was a beautiful butterfly who lost her mate in battle. To show her grief, she took off her beautiful wings and wrapped herself in a drab cocoon. In her sadness, she could not eat and she could not sleep and her relatives kept coming to her lodge to see if she was okay.

Of course she wasn't, but she didn't want to be a burden on her people so she packed up her wings and her medicine bundle and took off on a long journey. She wandered about for many days and months, until finally she had gone all around the world.

On her journey she kept her eyes downcast and stepped on each stone she came to as she crossed fields and creeks and streams. Finally, one day as she was looking down, she happened to notice the stone beneath her feet, and it was so beautiful that it healed her sorrow.

She then cast aside her cocoon, shook the dust from her wings, and donned them once more. She was so happy she began to dance to give thanks for another chance to begin her life anew. Then she went home and told The People about her long journey and how it had healed her.

To this day,The People dance this dance as an expression of renewal, and to give thanks for new seasons, new life, and new beginnings.

Permalink Reply by Sharikee on July 29, 2015 at 3:26pm
Butterflies for Children 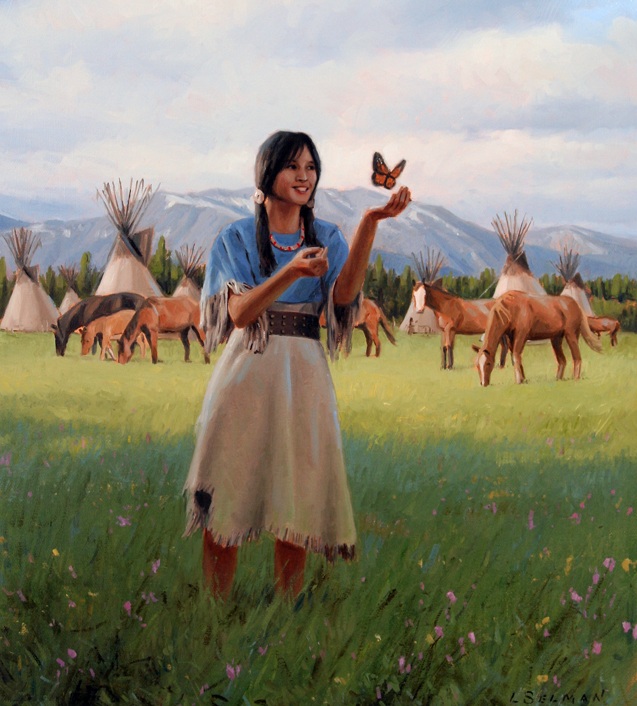 One day the Creator was resting, sitting, watching some children playing in a village. The children laughed and sang, yet as he watched them, the Creator's heart was sad. He was thinking: "These children will grow old. Their skin will become wrinkled. Their hair will turn gray. Their teeth will fall out. The young hunters arm will fail. The lovely young girls will grow ugly and fat. The playful puppies will become blind, mangy dogs. And those wonderful flowers - yellow, red, blue, and purple - will fade. The leaves from the trees will fall and dry up. Already they are turning yellow." Thus the Creator grew sadder and sadder. It was in the Fall, and the thought of the coming winter, with its cold and lack of game and green things, made his heart heavy.

Yet it was still warm and the sun was shining. The Creator watched the play of sunlight and shadow on the ground, the yellow leaves being carried here and there by the wind. He saw the blueness of the sky, the whiteness of some cornmeal ground by the women. Suddenly he smiled. "All those colors, they ought to be preserved. I'll make something to gladden my heart, something for these children to look at and enjoy."

The Creator took out his bag and started gathering things: a spot of sunlight, a handful of blue from the sky, the whiteness of the cornmeal, the shadow of playing children, the blackness of a beautiful girls hair, the yellow of the falling leaves, the green of the pine needles, the red , purple, and orange of the flowers around him. All these he put into his bag. As an afterthought, he put the songs of the birds in too.

Then he walked over to the grassy spot where the children were playing. "Children, little children, this is for you," and he gave them his bag. "Open it; there is something nice inside," he told them. The children opened the bag, and at once hundreds and hundreds of colored butterflies flew out, dancing around the children's heads, settling on their hair, fluttering up again to sip from this or that flower. And the children, enchanted, said that they had never seen anything so beautiful. The butterflies began to sing and the children listened smiling.

But then a songbird came flying, settling on the creators shoulder, scolding him, saying: "It's not right to give our song to these new, pretty things. You told us when you made us that every bird would have his own song. And now you've passed them all around. Isn't it enough that you gave them all the colors of the rainbow?"

"You're right," said the Creator. "I made one song for each bird, and I shouldn't have taken what belongs to you." So the Creator took the songs away from the butterflies, and that's why they are silent. "They are beautiful even so!" he said.

Permalink Reply by Sharikee on February 22, 2016 at 7:29pm
Whisper To A Butterfly If you want a special wish to come true, capture a butterfly and whisper your heart's desire to it. Since butterflies make no sound, they cannot tell the wish to anyone but the Creator. Being so colorful, the butterflies will easily be seen and the heart's prayers quickly answered.

By making a wish and releasing the butterfly, it will be taken on the wings of love to the heavens and granted. Softly whisper your wish for their eternal love and bliss, then carefully release and free the beautiful creature.

Permalink Reply by Sharikee on November 19, 2017 at 12:41pm
Butterfly Mythology 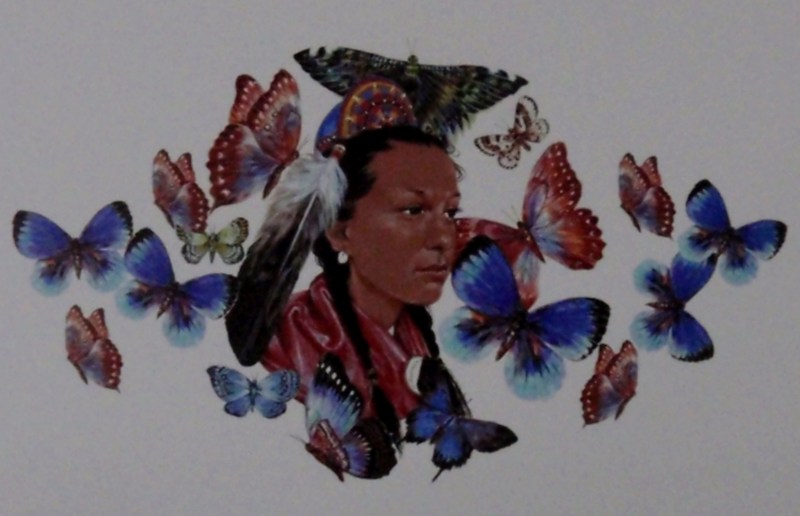 Because of their elegant beauty, power of flight, and the spiritual meaning of its life cycle, butterflies are found frequently in Native American myths and legends. The Blackfeet of North America believed that a butterfly helped to bring sleep and dreams. The Blackfoot symbol for a butterfly was often embroidered into the clothing and hair of a child to aid with sleep. In Hopi mythology, the butterfly also played an important role and its symbology was used throughout Hopi ritual and was a common feature on prehistoric pottery.

The spirit of the butterfly was often personafied because of the symbolic metamorphosis of its life. Born out of a caterpillar in the chrysalis, butterflies were a symbol of rebirth, regeneration, joy and happiness to Native Americans throughout Mexico. A common legend involves the Quetzalcoatl, a serpend god who is said to have entered the world in the shape of a chrysalis, painfully emerging into the full light of perfection, which the butterfly symbolized. Also, in Aztec culture, Itzapapalotl is a patron deity featured on the Aztec calendar and is symbolized by the Obsidian butterfly.

Mythology often surrounded moths in South America as well. If a particular, white moth is found in a bedroom, it must be treated with respect for it was believed to be the spirit of an ancestor coming to visit. Among the Aymara of Bolivia, a particular and rare nocturnal moth was thought to be an omen of death.

The orange butterfly is associated with the sun, life and consciousness. Spotting an orange colored butterfly can signify that a new dawn of healing and heart transformation is about to occur for someone who has been depressed or anxious.

A yellow butterfly represents joy and creativity. It reminds us to have fun. A yellow butterfly flying around you brings happiness and prosperity. Seeing one also means that something fun and exciting is on its way.

In some cultures, a brown or tan colored butterfly symbolizes a new life or a fresh start. Seeing a brown butterfly also means there is good news or important news soon to come your way. If a brown butterfly enters the house it means that an important message will arrive soon.

The Black Butterfly symbolizes new life from an old one. In many cultures, it is believed the black butterfly is a symbol of transition, renewal or rebirth.

Yesterday a butterfly
Came floating gently through the sky.
He soared up through the atmosphere
Then drifted close enough to hear.

I said, “I’d love to fly with you
And sail around the way you do.
It looks like it would be such fun

To fly up toward the summer sun.

But I have not your graceful charm.
I haven’t wings, just these two arms.
I’ve been designed to walk around.
My human feet must touch the ground.

Then magically he spoke to me
and told me what his wish would be.

He said, “What I’d love most to do
Is walk upon God’s Earth with you,
To squish it’s mud between my toes
Or touch my finger to my nose.

I’d love just once to walk around
With human feet to touch the ground,
But I have not two legs that swing,
I haven’t arms, just these two wings.”

And so we went our separate ways
In wonder and surprise.
For we’d both seen God’s precious gifts
Through someone else’s eyes.

I am enjoying reading all of this - thank you for posting it! That first bright step into the sunshine of life
begins with the opening of the family cocoon.
The caterpillar becomes a butterfly
spreading her wings into the world.

What she is today is but a tiny mirror.
of the transformation that is yet to come.
For with time, love, humor and warmth
She is an ever changing masterpiece.

Whether as wife, mother, career woman or all,
she will find her center of peace.
A place that is hers and hers alone,
the essence of what she is and will be.

Using the instincts that each of us have
to find the good in each other.
to be a caring friend, lover, helper and playmate,
to listen and share, to laugh and to cry.

With loving support of family and friends,
she takes flight down an unknown road towards her future,
like the rising of the sun in the east.
Each day filled with new beginnings.

Finding excitement and challenge at each new turn.
Her flight through life filled with many happy adventures
and memories to put in her book of life,
as the sun moves along that steady path across the sky.

When the sun at last begins to set in the west
and her flight nears its end, she can look back along her path
and know that she has been everything she can be
and has done her very best.

bridget orman left a comment for Teirsha Brogdon
15 hours ago