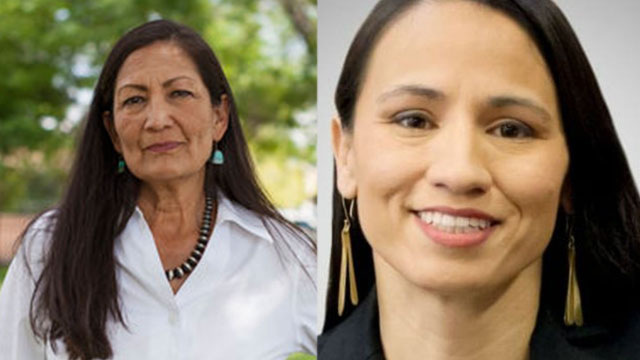 The growing issue of missing and murdered Indigenous women is a top priority for Deb Haaland, a Native American woman elected to the U.S. congress Tuesday.

Haaland, of New Mexico, is one of the first two Native Americans to sit in the House of Representatives after the midterm vote.

She was joined by Sharice Davids, an openly LGBT lawyer from Kansas and former mixed-martial-arts fighter.

“Growing up in my mother’s Pueblo household…I never imagined a world where I would be represented by someone who looks like me,” Haaland told voters after her win.

“We believe diversity in representation make us great.”

Both are Democrats and helped their party – and a record number of female candidates – take control of the House.

The U.S. Congress writes laws and overseas the executive branch of government including the office of the president.

In May, Davids told Bustle, “Native women are left out of the conversation. And when you think about just size of a group, we make up a small portion of the population.

“That means that what ends up happening is there’s just nobody in the room who knows anything about Native issues.”

Haaland mirrored the sentiment to NPR in July:

“Somebody has to be the first,” she said. “Native women, I mean we’ve been on the frontlines for a long, long time.

“Think of all the Native women who have fought for treaty rights and fishing rights and all of those things.”

Alexandria Ocasio-Cortez, a 29-year-old lesbian Latina in New York, also made history as the youngest woman ever elected to Congress.

Her family hails from Puerto Rico.

“Our district is 70 per cent people of colour, and we have never had a person of colour represent us in American history,” she told NowThis.