Welcome to the Cherokee Tribe...
The Cherokees are original residents of the American southeast region, particularly Georgia, North and South Carolina, Virginia, Kentucky, and Tennessee. Most Cherokees were forced to move to Oklahoma in the 1800's along the Trail of Tears.

What was the Cherokee Trail of Tears?

Trail of Tears was the Cherokee name for what the Americans called Indian Removal. During the 1800's, the US government created an "Indian Territory" in Oklahoma and sent all the eastern Native American tribes to live there. Some tribes willingly agreed to this plan. Other tribes didn't want to go, and the American army forced them. The Cherokee tribe was one of the largest eastern tribes, and they didn't want to leave their homeland. The Cherokees were peaceful allies of the Americans, so they asked the Supreme Court for help. The judges decided the Cherokee Indians could stay in their homes. But the President, Andrew Jackson, sent the army to march the Cherokees to Oklahoma anyway. They weren't prepared for the journey, and it was winter time. Thousands of Cherokee Indians died on the Trail of Tears. Many Native Americans from other tribes died too. It was a terrible time in history.
1000 Timeline of Cherokee History 1000 - Cherokee are well known in Tennessee River and the Great Smoky Mountain area, having traveled on foot from the Appalachian Mountains to the Iroquois territory. 1540 - Hernando de Soto travels the Cherokee territory. 1600s - Spanish, French,English explorers, and traders start to come into Cherokee Territory. 1730 - Cherokee leaders visit England. 1754 - Nanye hi becomes a Beloved Woman to her people after challenging the Cherokees in a battle against the Creeks. 1756- 1763 - Cherokees fight in the French and Indian war (against the British.) 1776 - Cherokees are again enemies against the British in the American Revolution. 1780- 1820 - Cherokees sign more treaties leaving their land to the United States. 1821 - The Cherokee syllabary is finished by Sequoyah. 1827 - Cherokees draft a constitution declaring themselves a nation. 1828 - The Cherokee Phoenix is published, Andrew Jackson becomes president of the United States, and John Ross becomes Principal Chief. 1830 - The Indian Removal Act is passed.

1835 - The Treaty of New Echota is signed declaring all of the Cherokee land east of the Mississippi River to the U.S. government. It was signed by Major Ridge and a small group of Cherokees.

1838 - The Trail of Tears started because Cherokees are forced off their land to Indian Territory.

1839 - A new capital is established by the Cherokee Nation in what is now known as Oklahoma.

1861 - At Park Hill a Treaty is signed between the Confederate government and the Cherokee Nation.

1889 - Indian Territory taken over by white settlers or "boomers."

1970 - Cherokee Nation gets ownership of beds and banks.

1984 - Eastern band of Cherokees and Cherokee nation hold first joint council meeting. It was the first meeting held in 146 years.

1988 - The Trail of Tears begin when the Cherokee Nation combines with the Eastern band of Cherokees.

1989 - The 150th anniversary for the Cherokees for arriving in the "Indian Territory" or a "New Beginning."

1990 - Chief Mankiller sign the self-governance agreement. This makes the Cherokee Nation one of the six tribes to cooperate in the self-determination project.

Do you know the legend of the Cherokee Indian youths' rite of Passage?

His father takes him into the forest, blindfolds him an leaves him alone. He is required to sit on a stump the whole night and not remove the blindfold until the rays of the morning sun shine through it. He cannot cry out for help to anyone.

Once he survives the night, he is a MAN.

He cannot tell the other boys of this experience, because each lad must come into manhood on his own.

The boy is naturally terrified. He can hear all kinds of noises. Wild beasts must surely be all around him . Maybe even some human might do him harm.

The wind blew the grass and earth, and shook his stump, but he sat stoically, never removing the blindfold. It would be the only way he could become a man!

Finally, after a horrific night the sun appeared and he removed his blindfold.

It was then that he discovered his father sitting on the stump next to him.

He had been at watch the entire night, protecting his son from harm.

Tagwadihi ("Catawba-killer"), better known as The Glass, also known as Thomas Glass, at least in correspondence with American officials,[1] was a leading chief of the Cherokee in the late 18th and…Continue

Named at birth Enoli (sometimes Inali), Black Fox was born about 1746.He was a brother-in-law of Chickamauga Cherokee leader, Dragging Canoe, and accompanied him on his migrations south to the Lower…Continue

I am seeking someone or a group that can teach me in the ways of my Elders. Being 1/2 Cherokee I was raised in the White Man's world. I have always been drawn to my roots and have several " extra…Continue

TAHLEQUAH, Okla. — The Cherokee Nation has been building a seed bank of Cherokee heirloom crops for years and is sharing some of that stock with citizens in an effort to keep the tradition of growing…Continue

You need to be a member of Cherokee Tribe to add comments!

My birth state is NC. My family is Sc Irish and Cherokee. Please visit my page :)

I share a picture of Georgia forest taken near Chicamauga. I send blessings love and respect with gratitude for all you do. oki just thought from my true heart that i think all native american people are good kind and i am so proud to call them m,y true family from my heart i thank each one of you thank you one and all

"But we have to stick by the wisdom of our ancestors..."

A long time ago the Elders and our ancestors learned to walk on the Earth and to live in harmony. They were taught the Laws which govern everything, and they were taught traditional values. This wisdom should be made available to the younger generations. We need to speak to the Elders and learn from them. We need to do this so we can pass the knowledge on to our children.

My Creator, help me learn the wisdom of my ancestors.

Comment by Christina on January 30, 2013 at 5:15pm
R.I.P. Secretary of State Charles Head, in your journey over the Rainbow Bridge. Prayers for comfort and strength to your family. May the Creator always watch over and protect them in this time of sorrow.

In honor and respect, Cherokee Nation flags will be flying at half-staff today in remembrance.


A message from our Cherokee Nation Veterans Affairs Office:
Fellow Citizens,
Just a reminder that as we go about our busy day, to take a few moments to reflect on the events of 71 years ago today. The Japanese navy attacked Pearl Harbor, Hawaii, and actually brought the United States into WW II. About 2,400 Americans were killed that Sunday morning, and about half of those were aboard the USS Arizona. Only about ten of those who survived aboard the Arizona are alive today. Please make a prayer for all the brave souls who gave their lives during WW II. Many Cherokee and other Native Americans made the ultimate sacrifice so that you and I can enjoy the freedom that they all believed in. Please feel free to share this message with those not on this network.
Respectfully submitted,
Rogan Noble, Cpl. of Marines ’68-‘72
Office of Veterans Affairs 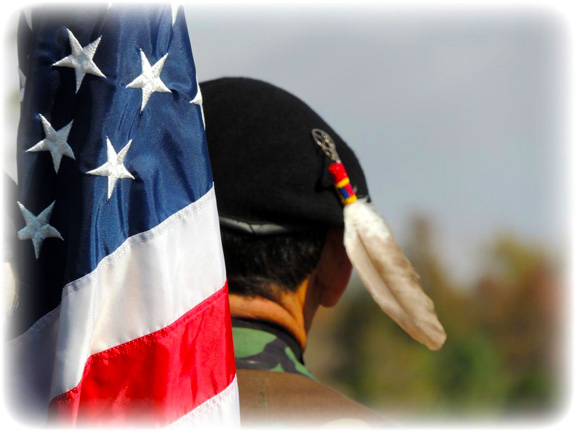