Opossums (Didelphimorphia, pronounced /daɪˌdɛlfɨˈmɔrfi.ə/) are the largest order of marsupials in the Western Hemisphere. They are also commonly called possums, though that term is also applied to Australian fauna of the suborder Phalangeriformes. The Virginia Opossum was the first animal to be named an opossum.[citation needed] The word opossum comes from Algonquian wapathemwa meaning "white dog". Opossums probably diverged from the basic South American marsupials in the late Cretaceous or early Paleocene.
Their unspecialized biology, flexible diet and reproductive strategy make them successful colonizers and survivors in diverse locations and conditions. Originally native to the eastern United States, the Virginia Opossum was intentionally introduced into the West during the Great Depression, probably as a source of food.[2] Its range has been expanding steadily northwards. Its range has extended into Ontario, Canada, and it has been found farther north thanToronto.

Characteristics
Didelphimorphs are small to medium-sized marsupials, with the largest about the size of a large house cat, and the smallest the size of a mouse. They tend to be semi-arboreal omnivores, although there are many exceptions. Most members of this taxon have long snouts, a narrow braincase, and a prominentsagittal crest. The dental formula is: By mammalian standards, this is a very full jaw. Opossums have more teeth than any other land mammal; only aquatic mammals have more.[citation needed] The incisors are very small, the canines large, and the molars are tricuspid.
Didelphimorphs have a plantigrade stance (feet flat on the ground) and the hind feet have an opposable digit with no claw. Like some New World monkeys, opossums have prehensile tails. Like all marsupials, the fur consists of awn hair only, and the females have a pouch. The tail and parts of the feet bearscutes. The stomach is simple, with a small cecum.
Opossums have a remarkably robust immune system, and show partial or total immunity to the venom of rattlesnakes, cottonmouths, and other pit vipers.[3][4] Opossums are about eight times less likely to carry rabies than wild dogs, and about one in eight hundred opossums are infected with this virus.[5]
Reproduction and life cycle

Sleeping Virginia opossum with babies in her relaxed pouch
As a marsupial, the opossum has a reproductive system that is composed of a placenta and a marsupium, which is the pouch.[6] The young are born at a very early stage, although the gestation period is similar to many other small marsupials, at only 12 to 14 days.[7] Once born, the offspring must find their way into the marsupium to hold onto and nurse from a teat. The species are moderately sexually dimorphic with males usually being slightly larger, much heavier, and having larger canines than females.[8] The largest difference between the opossum and other mammals is the bifurcated penis of the male and bifurcated vagina of the female (the source of the Latin "didelphis," meaning double-wombed). Male opossum spermatozoa exhibit cooperative methods of ensuring the survival of genotypically similar sperm by forming conjugate pairs before fertilization.[9] Such measures come into place particularly when females copulate with multiple males. These conjugate pairs increase motility and enhance the likelihood of fertilization. Conjugate pairs dissociate into separate spermatozoa before fertilization. The opossum is one of many species that employ sperm cooperation in its reproductive life cycle.
Female opossums often give birth to very large numbers of young, most of which fail to attach to a teat, although as many as thirteen young can attach,[8]and therefore survive, depending on species. The young are weaned between 70 and 125 days, when they detach from the teat and leave the pouch. The opossum lifespan is unusually short for a mammal of its size, usually only two to four years. Senescence is rapid.[10]
Diet
Didelphimorphs are opportunistic omnivores with a very broad diet. Their diet mainly consists of carrion and many individual opossums are killed on the highway when scavenging for roadkill. They are also known to eat insects, frogs, birds, snakes, small mammals, and earthworms. Some of their favorite foods are fruits, and they are known to eat apples and persimmons. Their broad diet allows them to take advantage of many sources of food provided by human habitation such as unsecured food waste (garbage) and pet food.

The opossum was once a favorite game animal in the United States, and in particular the southern regions which have a large body of recipes and folklore relating to the opossum.[14] Opossum was once widely consumed in the United States where available, as evidenced by recipes available online[15] and in books such as older editions of The Joy of Cooking.[16] A traditional method of preparation is baking, sometimes in a pie or pastry,[17] though at present "possum pie" most often refers to a sweet confection containing no meat of any kind. In Dominica and Trinidad opossum or "manicou" is popular and can only be hunted during certain times of the year owing to overhunting; the meat is traditionally prepared by smoking then stewing. The meat is light and fine-grained, but the musk glands must be removed as part of preparation. The meat can be used in place of rabbit and chicken in recipes.
Historically, hunters in the Caribbean would place a barrel with fresh or rotten fruit to attract opossums who would feed on the fruit or insects. Cubans growing up in the mid-twentieth century tell of brushing the maggots out of the mouths of "manicou" caught in this manner to prepare them for consumption.
In Mexico, opossums are known as "tlacuache" or "tlaquatzin". Their tails are eaten as a folk remedy to improve fertility.
Opossum oil (Possum grease) is high in essential fatty acids and has been used as a chest rub and a carrier for arthritis remedies given as topical salves.
Opossum pelts have long been part of the fur trade.
Behavior
Opossums are usually solitary and nomadic, staying in one area as long as food and water are easily available. Some families will group together in ready-made burrows or even under houses. Though they will temporarily occupy abandoned burrows, they do not dig or put much effort into building their own. As nocturnal animals, they favor dark, secure areas. These areas may be below ground or above.
When threatened or harmed, they will "play possum", mimicking the appearance and smell of a sick or dead animal. When playing possum, the lips are drawn back, teeth are bared, saliva foams around the mouth, and a foul-smelling fluid is secreted from the anal glands. The physiological response is involuntary, rather than a conscious act. Their stiff, curled form can be prodded, turned over, and even carried away. The animal will regain consciousness after a period of minutes or hours and escape.
Adult opossums do not hang from trees by their tails, though babies may dangle temporarily. Their semi-prehensile tails are not strong enough to support a mature adult's weight. Instead, the opossum uses its tail as a brace and a fifth limb when climbing. The tail is occasionally used as a grip to carry bunches of leaves or bedding materials to the nest. A mother will sometimes carry her young upon her back, where they will cling tightly even when she is climbing or running.
Threatened opossums (especially males) will growl deeply, raising their pitch as the threat becomes more urgent. Males make a clicking "smack" noise out of the side of their mouths as they wander in search of a mate, and females will sometimes repeat the sound in return. When separated or distressed, baby opossums will make a sneezing noise to signal their mother. If threatened, the baby will open its mouth and quietly hiss until the threat is gone.

Comment by ERIC SHARP on August 30, 2010 at 8:52am
Thank you your Opossum photo.
My wife and I raised two of these little guys and then they grow like weeds and we were getting attached to them they were very friendly.
How we ended up with them? Well it was about ten- O clock at night and we herd a loud ruckus on our porch something fighting so I went to the door turned the light on and to very large Opossums were fighting the light did not disturb them in the least. So my wife and I went out to check on them. We could here a sound of a small chirping, so I put the flash light over towards the sound, and there was a little Baby Opossum and the further over was another chirping so I shined the light over on to the secant Opossum, well we had to take care of them. So did and little research on what to feed them and watched them grow up they made great pet for marsupials a strange animal in deed. 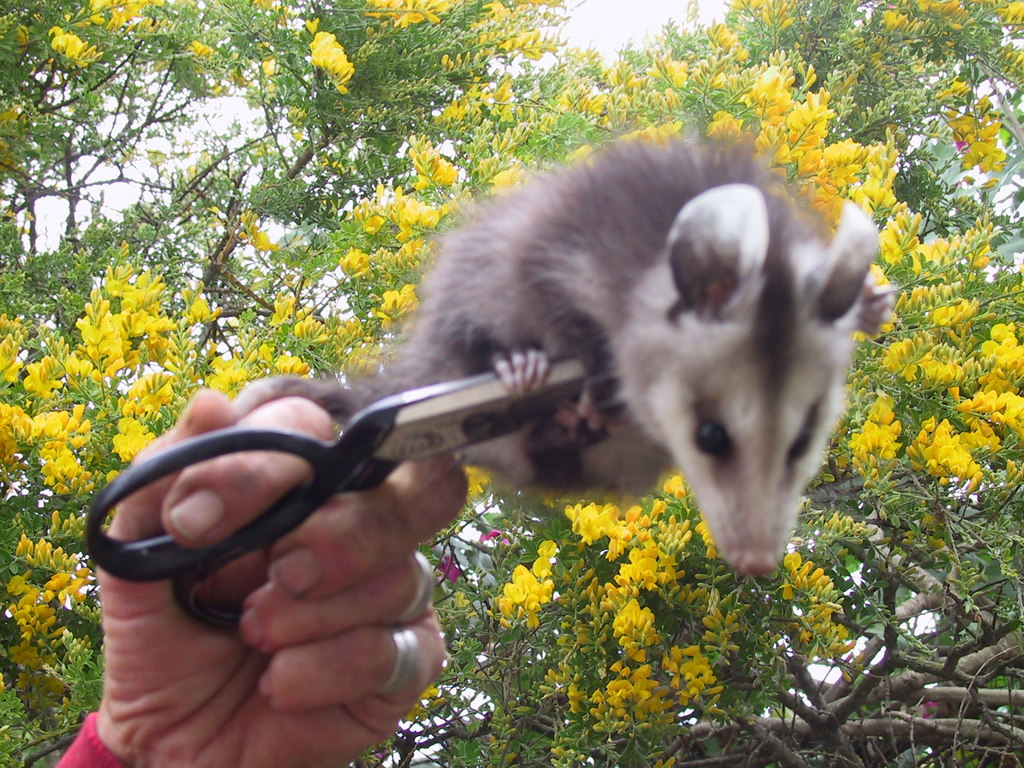