Hundreds of years ago in what is now Great Britain and Northern France, lived the Celts. The Celts worshipped nature and had many gods, with the sun god as their favorite. It was "he" who commanded their work and their rest times, and who made the earth beautiful and the crops grow.

The Celts celebrated their New Year on November 1st. It was celebrated every year with a festival and marked the end of the "season of the sun" and the beginning of "the season of darkness and cold."

On October 31st after the crops were all harvested and stored for the long winter the cooking fires in the homes would be extinguished. The Druids, the Celtic priests, would meet in the hilltop in the dark oak forest (oak trees were considered sacred). The Druids would light new fires and offer sacrifices of crops and animals. As they danced around the the fires, the season of the sun passed and the season of darkness would begin.

When the morning arrived the Druids would give an ember from their fires to each family who would then take them home to start new cooking fires. These fires would keep the homes warm and free from evil spirits.

The November 1st festival was called Samhain (pronounced "sow-en"). The festival would last for 3 days. Many people would parade in costumes made from the skins and heads of their animals. This festival would become the first Halloween.

During the first century the Romans invaded Britain. They brought with them many of their festivals and customs. One of these was the festival know as Pomona Day, named for their goddess of fruits and gardens. It was also celebrated around the 1st of November. After hundreds of years of Roman rule the customs of the Celtic's Samhain festival and the Roman Pomona Day mixed becoming 1 major fall holiday.

The next influence came with the spread of the new Christian religion throughout Europe and Britain. In the year 835 AD the Roman Catholic Church would make November 1st a church holiday to honor all the saints. This day was called All Saint's Day, or Hallowmas, or All Hallows. Years later the Church would make November 2nd a holy day. It was called All Souls Day and was to honor the dead. It was celebrated with big bonfires, parades, and people dressing up as saints, angels and devils.

But the spread of Christianity did not make people forget their early customs. On the eve of All Hallows, Oct. 31, people continued to celebrate the festivals of Samhain and Pomona Day. Over the years the customs from all these holidays mixed. October 31st became known as All Hallow Even, eventually All Hallow's Eve, Hallowe'en, and then - Halloween.

The Halloween we celebrate today includes all of these influences, Pomona Day's apples, nuts, and harvest, the Festival of Samhain's black cats, magic, evil spirits and death, and the ghosts, skeletons and skulls from All Saint's Day and All Soul's Day.

Comment by LadyHawkღ on November 6, 2010 at 8:34am
Well I'm glad you enjoyed it. I try to post a blog or forum about the different Holidays here in the U.S. I try to keep them short!
LadyHawk

Comment by Ms. Down-to-Earth on November 6, 2010 at 7:24am
This is an interesting read! Thanks for all your research to educate us. 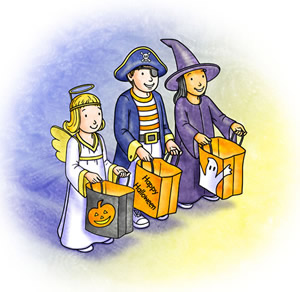 Almost all pre-1940 uses of the term "trick-or-treat" are from the western United States and Canada.Trick-or-treating spread from the western United States eastward, stalled by sugar rationing that began in April 1942 during World War II and did not end until June 1947.
Early national attention to trick-or-treating was given in October 1947 issues of the children's magazines Jack and Jill and Children's Activities, and by Halloween episodes of the network radio programs The Baby Snooks Show in 1946 and The Jack Benny Show and The Adventures of Ozzie and Harriet in 1948.The custom had become firmly established in popular culture by 1952, when Walt Disney portrayed it in the cartoon Trick or Treat, and Ozzie and Harriet were besieged by trick-or-treaters on an episode of their television show. In 1953 UNICEF first conducted a national campaign for children to raise funds for the charity while trick-or-treating.

Although some popular histories of Halloween have characterized trick-or-treating as an adult invention to rechannel Halloween activities away from vandalism, nothing in the historical record supports this theory. To the contrary, adults, as reported in newspapers from the mid-1930s to the mid-1950s, typically saw it as a form of extortion, with reactions ranging from bemused indulgence to anger. Likewise, as portrayed on radio shows, children would have to explain what trick-or-treating was to puzzled adults, and not the other way around. Sometimes even the children protested: for Halloween 1948, members of the Madison Square Boys Club in New York City carried a parade banner that read "American Boys Don't Beg." The National Confectioners Association reported in 2005 that 80 percent of adults in the United States planned to give out confectionery to trick-or-treaters, and that 93 percent of children, teenagers, and young adults planned to go trick-or-treating or participating in other Halloween activities. In 2008, Halloween candy, costumes and other related products accounted for $5.77 billion in revenue.