“It never crossed my mind that one day I would be asked to be featured on a Canadian stamp. It is a lovely and proud surprise,” said Robertson, 67, at the ceremony unveiling the stamp, which bears a photograph taken by David Jordan Williams in 1994, according to a postal press release. Williams took the portrait during the creation of Robertson’s project “Music for the Native Americans.”

Robertson, whose mother is Mohawk, grew up in Toronto but spent much of his childhood with extended family on the Six Nations reserve, which is where he first got hooked on the guitar, he told the Globe and Mail.

A few days before the stamp was announced, Robertson was made an Officer of the Order of Canada, distinguished for his ability to transcend “cultural and geographic barriers” as a role model for Native and non-Native artists alike, according to the Globe and Mail.

The stamps for the series, which also includes Kate and Anna McGarrigle, Bruce Cockburn and Ginette Reno, were designed by Circle Design Inc. of Winnipeg, each one bearing monochromatic photos of the artist flanked by his or her Order of Canada sign. A million of each stamp will be printed, Canada Post said.

“We’re proud to be able to add one more honor to Robbie Robertson’s long list of accolades,” said Jim Phillips, Director of Stamp Services for Canada Post. “It’s an honor for us to be able to pay tribute to such a prolific and talented artist.” 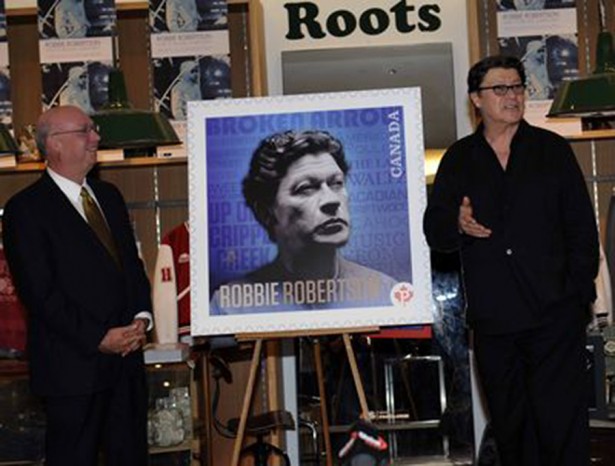 Comment by Richard Marquez on July 3, 2011 at 11:03pm
I love Robbie,and his musical work is legendary...I am glad he was honored this way...blessings to him always...