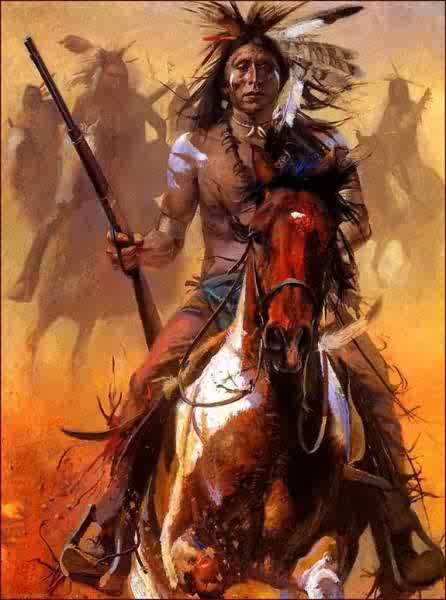 They did not see why they needed twelve hours of darkness! It was during the daylight that they got their work done - planting the fields, hunting, making their many crafts - arrowheads, baskets, pots. No, they wanted the light. So, they got together in a circle to discuss it. And, yes, most of the people wanted all light, but, you know, there are always the few nay-sayers. And, they said, "No! We like the night. It is cool, and we can sleep."

Eagle thought this was a strange request, but he flew into the sky and landed at the foot of the Creator. He told Him what the people wanted. The Creator looked surprised for He thought the length of day was good. "Well," He said, "if you are sure that is what the people want, then, so be it. From now on, a day will be twenty-four hours of light."

Eagle came back to the circle of people and told them what the Creator said. And, those who loved the light called out "Yes! Yes! We love the light!"

At first, it was a good idea. The corn, the squash, the beans...grew and grew in the sun. The huntiing? The hunting was terrific. Never before had they so much meat to eat and hides for their clothes and houses. In the light they were able to work and work on their many crafts. Yes, this was good....except for one thing. You see, with the sun blaring down all day, the people were not able to sleep. And without sleep, they became, well...crabby.

"Where is my billet? I laid it right here. You took it."

"Me? What would I want with your old billet!"

With the sun blaring - down the vegetables grew, but then the sun dried them up. It came to be that the only things they could grow were weeds! As for as the hunting...well, they soon hunted out the surrounding woods and had to travel many many days to find any game at all...and that was usually some scrawny old rabbit.

Eagle came back to the People, and those who loved the night shouted, "Yes, Yes! We love the night!"

At first, they were right. It was so nice and cool now that the sun was gone. They slept and slept, but when they woke up...it was still dark! They couldn't see to do any of their work. Their gardens didn't grow vegetables or weeds...it grew nothing! And there in the dark, the animals came back, but not just rabbit and deer. The big animals like mountain lion and bear came, too. Worst of all the days grew colder and colder with no sun. Many of the elders and children became sick and many died. It did not take long for the People to decide that they had made a big mistake.

Again, they talked in council. "What have we done? How can we get back to the way it was? The Creator knew what was best." They called for Eagle and begged him to go back one more time to plead with the Creator to make things as it was before.

This time Eagle was more than happy to return to the Creator. He sat at His feet and told him all that happened in the darkness. And, when he told Him about how many of the People died...the Creator wept. "Now," said Eagle, "the People want it back the way it was...twelve hours of daylight and twelve hours of darkness."

But, the Creator said, "No. We already tried that, and it did not work. I have a new plan. From now on only two days out of the year will have equal daylight and darkness. On those two days, we will call it the Equinox. Then, as the sun travels to the South, the days will get shorter and shorter until it is the shortest day of the year. We will call that the Winter Solstice. Those who love the night will be happy. And, as the sun travels back to the North, over the Equinox, the days will grow longer and longer until it is the longest day of the year. We will call that the Summer Solstice. Those who love the daylight will be happy. This you must tell the People. And, you must tell them that I will create a new tree, stained with the blood of their ancestors who died so tragically. I will call this tree "The Red Cedar" and it will be a sacred tree."

Chris Durbin left a comment for Ms. Down-to-Earth
14 hours ago