At the Denver March Powwow of 2010, three female veteran soldiers representing their Crow, Northern Cheyenne and Navajo nations were preparing to join the grand entry proceedings in which color guards honor veterans to begin the festivities. Among them was Mitchelene BigMan, who had designed her jingle dress to represent her status as a Native woman veteran of the U.S. Army.

While jingle dresses generally have a bright mixture of colors and are adorned with jingle bells, those worn by BigMan and the other two female vets proudly displayed large emblems of their branch of service on their backs. When an elder, Camille Clairmont, noticed how their red, white and blue jingle dresses were decorated—with the women’s designation of unit and rank, as well as U.S. flags and Iraqi Freedom patches—she asked Mitchelene why they were not with the other color guards.

When BigMan explained that they were not official color guards, Clairmont told them “the dresses speak for themselves.” Meaning, they looked as if they belonged in the color-guard procession.

BigMan agreed, and the three women decided they would join the other color guards. The male color guards told them to go at the end of the line, behind all of the male veteran color guards. BigMan was at first discouraged but then realized their position in the rear of the line was not a dishonor, but rather, a special position, since they’d be the last color guards seen.

As the color guards entered the arena, the emcee announced, “History has been made today—in all my years as an emcee, there has never been an all-female Native American color guard, and so I have the privilege in announcing our first.” And through such accidents is history made.

After marching at the Denver powwow, BigMan decided to officially serve as an all-women Native color guard. She founded The Native American Women Warriors, a non-profit organization that seeks to address the needs of today’s modern military women. Her Women Warriors are also the first all Native American female color guard. They now regularly serve as a color guard at powwows, and travel all over the country for events honoring Native veterans.

In the two years since the inception of the group, they have traveled all over the U.S. They were in the 91st Annual NYC Veterans Day parade of 2010 and presented the colors as part of the “Band of Pride Tribute” in Times Square while in regalia in 2011. Most recently, the group appeared at the White House for the National Tribal Summit on December 5th.

That trip was their second visit to D.C. They had previously met with senators and congressman while at a Native American Women Warrior Summit, which will now be an annual summit.

The group is currently in D.C., on its third trip, this time participating in the inauguration events for President Barack Obama.

According to Baker, there is a lot of healing that needs to be done for female veterans. “We say the jingle dress is a medicine dress and the way that the patches are put on is medicine to people. We have seen people cry. There is not one person I don't think it hasn't touched when they see it.”

Though she is extremely proud of the color guard, Baker says that is not all that the group is about. The Native American Women Warriors’ mission statement states: “We are dedicated to surfacing the recognition of women veterans, especially those of Native American descent, and their contribution to the military that represented our indigenous people and the United States of America.

“Our goal is to assist our Native American women veterans in receiving the help desperately needed to empower themselves in order to take on modern challenges in: transitioning from the military to civilian sector, housing, education, employment, VA benefits awareness, domestic violence, locating child care and any other needs our Native American women veterans may have. We also aim to empower our women with a powerful mind, body and spirit.”

“We are now in the process of setting up chapters all across the country in different regions and different teams to travel to events and do motivational speaking,” says Baker. “Hopefully, a few years down the line we can have regional centers set up around the country so that Native American military women can come in and receive services from us directly, rather than having to go through the government.”

According to Vice-President Kelly, a former Army Command Sergeant Major, being a member of the group brings a feeling of honor, pride, patriotism, self-esteem and self-confidence in a society where Native Women veterans are not recognized to the extent of men. “History provides many stories of Native women who fought to protect their lands and home. There are stories of Native women who went out on War Parties and were recognized by the Chief of their accomplishments. I joined to bring awareness that Native women are warriors also.” 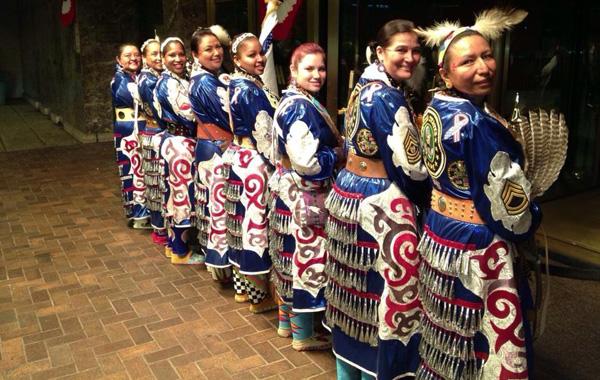