Honoring the solstice is something lost to most of us, and it feels deeply meaningful, in a mystical sort of way, to choose to make a glimmer of connection. Here is a winter solstice rite observed by many Native American tribes. It is a ritual that honors your ancestors, belief system, and a way of offering prayer and gratitude:

Made out of cedar and are forked;
Are equivalent to the measurement from the maker’s elbow to the tips of their fingers;
and
Are taken from a tree that the maker feels connected to.
Tobacco is offered to the largest tree of the same species in the area and permission is asked to take a part of its relative.
The bark can be stripped.
The bark can be carved on the stick.
One feather should be added to the prayer stick; traditionally this is a wild turkey feather.
A bit of tobacco is placed in a red cloth and tied onto one of the forks.
Fur or bone from an animal that the maker wishes to honor is tied onto the stick.
Metal or stones should not be tied to the stick.
It is also customary to say prayers silently as one makes the prayer stick.

From Celebrating the Great Mother, by Cait Johnson and Maura D. Shaw. 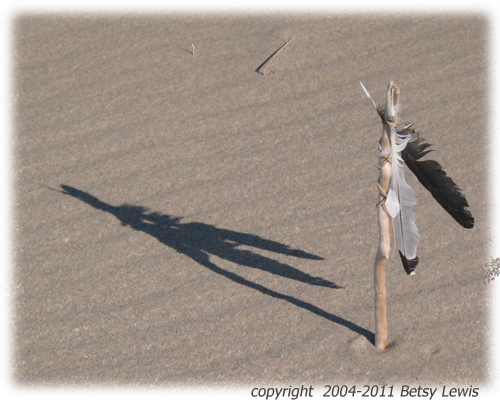 Like the picture as it could be used as a sundial as well.

From the Gift Store
yesterday

From the Gift Store
yesterday