Good reading Where did we come from? Part 1 and 2 of a series by Red Wolf

Where did we come from?

Part 1 of a series by Red Wolf

Debate of this question between Anthropologists and Archaeologists is ongoing and sometimes heated. Anthropologists embrace the Bering Land Bridge theory, believing man crossed over the Bering Strait when the Polar Ice Cap caused the oceans to freeze, lowering the water level and allowing a natural land bridge to be exposed. This is a common theory that seems to have been widely accepted by the scientific community, yet, Archaeologists believe that man crossed the frozen land masses from Siberia down through Canada into the United States. This entire one third of the world was glaciated. This Wisconsin glacier formed as far south as to cover the Great Lakes and south to mid or southern Ohio. If this theory is accepted, man would have been on this continent a good two centuries before the Bering Land Bridge was exposed. Again, these two theories are still being debated and need to be proven.

There is proof of a civilization called “Clovis” that occupied the area today known as Texas, about 12,000 years ago. Some scientists believe that 25,000 years before the “Clovis” civilization, humans were slowly migrating into the Americas, but no remains of these people have ever been found, nor have any remains of Neanderthal man been found in the Americas. This means that humans were homo sapien sapiens when they occupied this land (scientific word for true human beings).

The “Clovis” people left behind many artifacts that show us how they survived for thousands of years following the Ice Age. They were hunters, flintnappers who used fluted spear points and tools made of stone and bone. There is proof they used the ribs of Mammoth to build their lodges and used fire to cook and for heat in fire pits. They used red oxide to make paint and were able to write and count. They lived in dangerous times at the end of the ice age from Saber-toothed tigers, Mammoths, 20 ft. long ground sloths, beavers the size of modern bears and the short-faced bear who were twice the size of today’s Grizzly’s. The change in climate at the end of the Ice Age eventually brought these mammals to extinction and the”Clovis” people scattered as their own civilization decreased. Some went North, some West, some East and some South. These people were and are the Original People of the Americas, the beginning of Native Americans of the United States, dating back to 9,500-9,000 B.C. Science has proven that Native Americans are the oldest known species of homo sapein sapiens, anywhere in the world, and they did not evolve from the Cro-Magnon or Neanderthals but were of Asian descent.

Everyone knows where and when the white man set foot on American soil, but Native Americans are a people who have inhabited, grown and evolved in North America for over 12,000 years. They changed, as other species that were able to survive their harsh environment changed. It took thousands of years for all other species to evolve into the familiar forms we now know and recognize. Native Americans became more adapt to their surroundings, able to communicate, intelligent enough to care for their families by hunting and gathering. They developed a clan system, a system we still use today, and before they killed an animal they asked its forgiveness, they cared for the land they knew and gave thanks by beating crude drums and dancing around their fires. Not much physical change has occurred, but spiritually, they left behind their mark for all to follow, a mark that hasn’t changed in 12,000 years, the mark of being Native American.

Part 2 of a series by Red Wolf


As the landscape changed during the post-Ice Age, the Native American culture had to change and adapt to the extremes of temperature and climate. The climate began to warm and the waters that had flooded the western deserts began drying up. Here, a few people remained. Others abandoned the lakes and began to occupy the mountains and their valleys.

(I will now relate to these people as 'Indian' instead of 'Clovis".)

The Indians who remained around the disappearing lakes were the ancestors of the Western Plains Indians. We know them as the Apache, Comanche, Kiowa, Crow, Sioux, Hopi, Pueblo and Navajo, just to name a few.

The people that went northeast became the Algonquian, Iroquois, Huron and Chippewa. Others went southeast and became the Cherokee, Chickasaw, Choctaw, Creek and Seminole. (These five tribes were later referred to as the Five Civilized Tribes--a European description.)

(There were many more tribes which developed over the centuries, too many to be listed here. I have just skimmed the surface and if I haven't named your ancestry tribe, it was not intentional. From this point on I will concentrate strictly on the Northeastern tribes, especially the Algonquians and their descendents.)

Through the ages they came; facing, enduring and overcoming obstacles that we cannot even imagine today. Centuries of learning to live with, use to their advantage and overcome the elements of a world devoid of human life (except that of their own), and to evolve into a race of people who understood their world in a way we will never understand ours.

They had no one to teach them how to hunt, fish or farm, yet they did and were successful. No one taught them how to skin an animal and make clothing, yet, they did. How did they do these things without instruction? How did they develop a language? So many questions and the only answer that is logical---they did what they had to do and what they thought was right in order to live and develop.

The Algonquian territory in the Northeast covered the area from the Rockies to the Atlantic coast. The languages were Algonquian, interspersed with Iroquoian. The Algonquians south of the St. Lawrence were farmers. Those in the North and West were hunters and those along the Great Lakes fished, gathered nuts, wild rice and hunted. Some centuries later the Algonquians in the Minnesota area left for the Northern plains to tend bison herds. These people became the Cheyenne, Blackfeet and the Arapaho.

Through the centuries, outbreaks of aggression occurred as a consequence of cultural and regional differences. These differences were dealt with much the same way across the continent. The tribes leaderships were divided between a Chief and a war Captain, and most clans had their own peace and war chiefs. The peace chief ruled most of the time, but when threatening times prevailed, the war chief declared martial law and he would take over. Today we still carry on with these same traditions, to a lesser degree of hostility.

For over a millennium, the Algonquian and Iroquois had lived on the land in the Northeast. They spoke different languages and were often at war with each other, yet, they both shared many features of their cultures. Tribes were matrilineal, both were farmers and the women of both tribes planted and harvested the crops. The Hurons to the North were also farmers and spoke the Algonquian language.

Eventually, Indian peoples began to branch out, becoming their own nations. The farmers along the coast became the Lenape and from them came the Powhatans of Virginia and the Massachusetts. They developed towns with the usual politician system of chiefdom. Each town was under the care of an elite family known as Sachems or Sakimas. The Sachems, in gratitude for the bounty of their fields, held annual ceremonies of thanksgiving for their town.

The Northern Indians, who broke from the Lenape, moved up the Northeast coast and become the Micmac, Malecites and the Ojibwa. These three tribes eventually crossed into Canadian territory. All together, there are at least twenty-seven different tribes that originated from the Lenape in the Northeast and Canada, not including the sub-cultures that broke off from them that we know today.

For thousands of years these people developed in mind, body and spirit against odds that if thrown in the paths of today's Americans, one would have to wonder if we could survive as they did. With no guns, no bombs or modern day conveniences, just our intellect and wit, could we understand our world and survive? What would the first Europeans who set foot on this soil have done if they came face to face with a beaver the size of a bear? Makes one wonder, doesn't it? 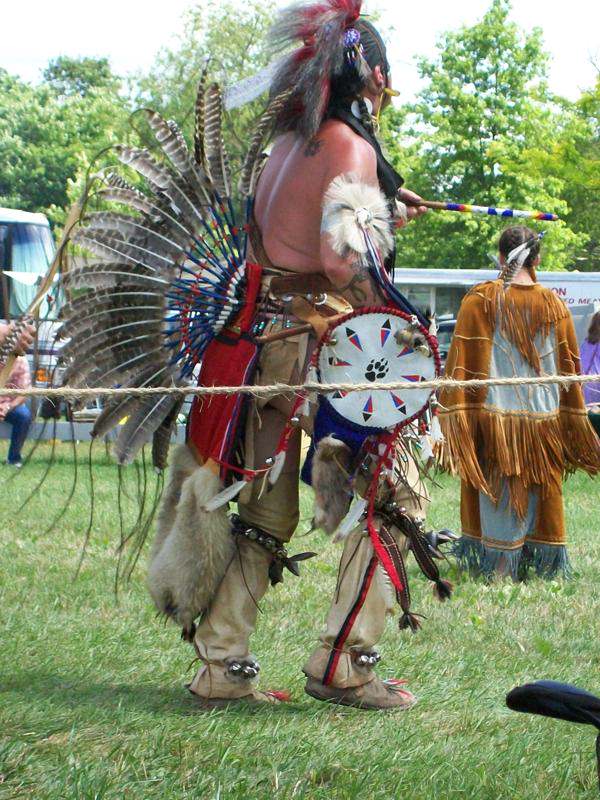