The buffalo jump was used for 5,500 years by aboriginal peoples of the plains to kill buffalo, by driving them off the 10 meter high cliff. The Blackfoot drove the buffalo from a grazing area in the Porcupine Hills about 3 kilometers west of the site to the "drive lanes," lined by hundreds of cairns, then at full gallop over a cliff. The cliff itself is about 300 meters long, and at its highest point drops 10 meters into the valley below. The site was in use at least 6,000 years ago, and the bone deposits are 10 meters deep. After falling off the cliff, the buffalo carcasses were processed at a nearby camp.

Lewis and Clark at the Madison Buffalo Jump

Lewis: "...part of the immense pile of slaughter." 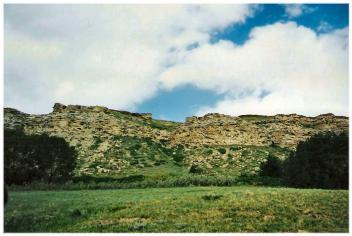 Although Lewis and Clark never visited the site of Madison Buffalo Jump during their exploration of the Missouri Headwaters, they probably did witness the aftermath of a buffalo stampede. On May 29, 1805, Lewis, near what would be named Slaughter River, speculated about one scene he described:

"Today we passed on the Stard. Side the remains of a vast many mangled carcasses of Buffalo which had been driven over a precipice of 120 feet by the Indians and perished; the water appeared to have washed away a part of the immense pile of slaughter and still their remained the fragments of at least a hundred carcases…they created a most horrid stench. In the manner the Indians of the Missouri destroy vast herds of buffalo at a stroke; for this purpose one of the most active and fleet young men is selected and disguised in a robe of buffalo skin, having also the skin of the buffalo's head with the years and horns fastened on his head in form of a cap…all shew themselves at the same time moving towards the buffalo."

The (Indian) decoy in the mean time has taken care to secure himself in some cranny or crevice of the cliff which he had previously prepared for that purpose. The part of the decoy I am informed is extremely dangerous, if they are not very fleet runners the buffalo tread them under foot and crush them to death, and sometimes drive them over the precipice also, where they perish in common with the buffalo.

The other Indians now surround the herd on the back and flanks and at a signal agreed on all shew themselves at the same time moving forward towards the buffalo; the disguised Indian or decoy has taken care to place himself sufficiently nigh the buffalo to be noticed by them when they take to flight and running before them they follow him in full speed to the precipice, the cattle behind driving those in front over and seeing them go do not look or hesitate about following until the whole are precipitated down the precipice forming one common mass of dead an mangled carcases 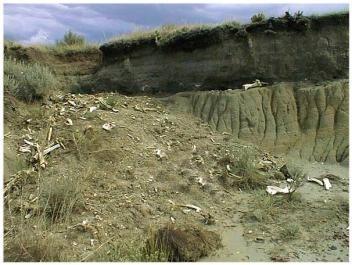 It is very unlikely that the scene Lewis described was a deliberate bison kill. To leave so many bison carcasses to rot was against every practice of the Plains Indians. It is more likely that the bison had simply stampeded by themselves, or drowned. In describing one phase of the buffalo hunt, however, he is both vivid and accurate. Horses weren't introduced to the Indians of the Northern Plains until the early 18th century. At least 2,000 years ago, the ever-resourceful tribes devised a simple way to provide their food, clothing, 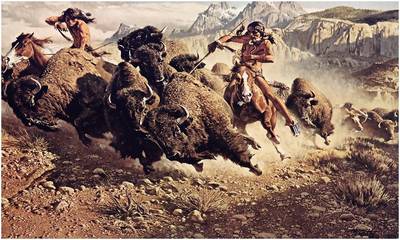 At what is now called Madison Buffalo Jump, the Blackfeet, Salish, Shoshone, and possibly other tribes gathered their families around this precipice. They then would herd bison nearer and nearer the cliff, until they could stampede the animals, forcing them to fall to the ground below. 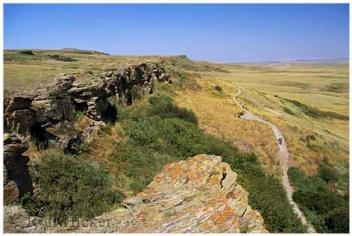 Once the animals had fallen to their deaths the families camped below the cliff went to work. After the bison had been butchered for their meat, their skins and horns were harvested for tipis, hides, blankets, and tools. The horns were made into spoons and tools, as were the bones. It took an average of 18 hides to make one tipi, with larger ones using as many as 30. Any meat that wasn't needed immediately was dried on long racks to make jerky. The meat kept for a whole season and was sometimes mixed with berries and carried in pouches for emergency provisions on long winter hunts.

Indian uses of the buffalo
http://siouxme.com/buff-ind.html

I would have loved to see those immense herds of buffalo. I can't imagine a teepee made of 30 hides. Must have been very heavy. We have an 18 ft teepee made of canvas and it took three strong people to lift the rising pole for the skin of the teepee. Life would have been very hard back then compared to the lifestyle we have today. I can't even imagine moving the buffalo meat without horses, and cutting up and curing the skins. What an undertaking. I helped my dad skin a deer once and it was a difficult task for me as a 12 year old. Does anyone know? Did they hang the meat in great hunks to allow it to bleed out?

It may sound a bit gruesome but times were hard and this was an easier and probably more humane way of supplying the tribes with what they needed to survive.
Nice history!

bridget orman left a comment for Susan Hamilton
57 minutes ago