Miller, who is Mohican from the Stockbridge-Munsee Community in Wisconsin, is a three-time Grammy winner and his work spans symphonies, traditional and popular music in a Native key. He has made his home in Nashville; a city that he notes is on the route of the Trail of Tears and was a hub in the civil-rights movement. To Miller it was a city of musicians who have helped him grow into a journeyman player, not so much a star as a master musician who remains rooted deeply in his heritage.

Miller, 55, still spends the better part of the year on the road, as a painter and, of course, as a musician. The necessity of live concerts has grown as radio playlists have constricted, and Miller’s music has expanded into prayerful and symphonic styles, and acoustic roots music.

“Roots music is now where it is at,” Miller said. “It’s the marriage of history, belief and soul with the earth. It’s a good, strong marriage even though sometime it could end because there is no strong union anymore between artists and the radio. The live performances mean the world to me. They are much more powerful, the guy who is real, the guy who sings the songs.”

But what songs, American Indian News Service editor Kara Briggs wondered, are essential songs to an American Indian popular genre musician like Miller? The question is inspired by the list of 100 essential country songs that Johnny Cash famously wrote in 1974 for his daughter, Rosanne Cash. Like Rosanne Cash, who last year released an album of some of those songs, Miller after 35 years in the music business is exploring in performance the songs that represent his musical roots.

Miller picked from a definite baby-boomer discography, focusing on music he heard growing up or as a young man. Like Miller’s own style, the songs are melodic, and they are packed with political and social meaning. Miller has performed with many of the artists who wrote and recorded these songs. And these are the songs that helped set the course for Miller’s own journey.

1. “Witchi Tai To” by Jim Pepper
At the Smithsonian’s National Museum of the American Indian last summer, Miller rendered “Witchi Tai To,” the signature piece by the late Creek and Kaw saxophonist Jim Pepper. Joining him on the song, Martha Redbone cut a deep swath of melody under Miller’s tenor and bell-like clarity while Derek Miller tickled jazz riffs out of his guitar; the younger Miller, who is no relation, smiling at the sound that for five minutes engulfed the audience outside the museum.

“Witchi Tai To” reached number 69 in the Billboard pop chart in 1969. Of Pepper, Miller said, “He lifts the spirit.”

2. “Universal Soldier” by Buffy Sainte-Marie
The song was originally released by Sainte-Marie in 1964, and it created a buzz in the community of folk musicians. Sainte-Marie has said that the song is about individual responsibility for war, and it was a controversial anti-war song during the Vietnam era, for which this early American Indian pop celebrity was both booed and applauded. It ends on an uncertain note, with the lines: “His orders come from far away no more, they come from here and there and you and me, and brothers can’t you see, this is not the way we put an end to war?”

Miller sang the song with Buffy Sainte-Marie in 2008. He said, “It is music about how to make peace. If you go back to our Native music, this is what it is about.”

3. “Come and Get Your Love” by Lolly Vegas of Redbone
Redbone’s 1974 hit love song brought this American Indian band into the public view. It peaked at number five on the Billboard Hot 100, and remained in the top 100 for six months. The band catalyzed for Miller, who graduated from high school in 1973, an image of Native pop musicians who could share a cultural identity even while singing pop music.

“I listened to that more than their other songs that were tough on Native issues, because I am also a part of the human race,” Miller said. Like Redbone, Miller noted, “I didn’t base myself only on Native music.”

4. “Little Wing” by Jimi Hendrix
“Little Wing” was released on Axis: Bold as Love, 1968. Hendrix would say that the song was based on “a very, very simple American Indian style,” and it is also categorized as rhythm and blues, with a beat.

“It’s a prayerful offering,” Miller said. “It’s my stretching exercise when I warm up before a concert. I do it for myself and the sound guys.”

5. “After the Gold Rush” by Neil Young
The title song to Young’s third solo album is one of Miller’s personal favorites. Tinged with environmentalist values and Native-compatible imagery, the telling of an apocalyptic story is relevant for Miller who in 2009 was commissioned by the La Crosse (Wisc.) Symphony Orchestra to write a piece.

“The Last Stand” commemorates the Battle of the Little Bighorn, and is about 25 minutes long. According to Miller, survivors of the war say that’s about as long as the battle lasted—or “as long as it takes the white man to eat his dinner or how long it takes the sun to go between two lodge poles.”

Miller later did a definitive cover of the song in Spirit Songs: Best of Bill Miller.

6. “Ballad of Ira Hayes” by Peter LaFarge
The song would go gold on Bitter Tears, the risky American-Indian-themed album by Johnny Cash that put Peter LaFarge on the map. LaFarge, Narragansett, wrote about Ira Hayes, the Pima Marine who helped to raise the flag at Iwo Jima, but died of alcoholism after the war.

Miller reflects, “Then people wrote and sang about Indians out of pure honor and love. More than people in the New Age did. They (the New Agers) were people without understanding putting Native flute on tracks, but no Native musicians…With this music Cash made a statement.”

7. “Four Strong Winds” by Ian Tyson
Miller pauses for minute, then sings, “Four strong winds that blow lonely, seven seas that run high, all the things that don’t change, come what may.”

He said, “That’s prayer music, prayer to the song, roots music from the land. Folk songs, story songs around a campfire, you just play it from the heart the way Floyd Westerman used to do. You don’t need anything else.”

“Four Strong Winds” was a hit for Tyson and his wife Sylvia in 1964. In Tyson’s career as a cowboy singer over the past 25 years, Miller has joined him onstage a time or two.

8. “Ohio” by Neil Young
“It immediately came out after the National Guard shooting at Kent State,” Miller said. The shooting left four students dead. Four decades later, it demonstrates the power of a song to raise awareness and inform people about what happened. It is, he said, relevant for American Indians, who have the potential to write music about a variety of injustices both historic and contemporary.

9. “Free Man in Paris” by Joni Mitchell
Miller loves this song, about a man feeling the weight of responsibility and longing for escape. He likes the complexity of the story, the beat and the melody. It’s a kind of complexity that he feels is lacking in a lot of contemporary music.

He said, “It’s about getting a depth, layering it in, tapping in, like Frank Sinatra singing over an orchestra. The Beatles would layer stuff on top, more instruments, not more machines. Beauty and spirit, these are the concepts of art that need to revive, to get to the interior, to get to the hearts.”

10. “What the World Needs Now” by Jackie DeShannon
Miller mentioned the 1969 classic as his personal antidote against today’s popular culture.

“They didn’t say what the world needs now is sex, drugs and more hip-hop artists,” Miller said. “What it needs is the power of melody.” 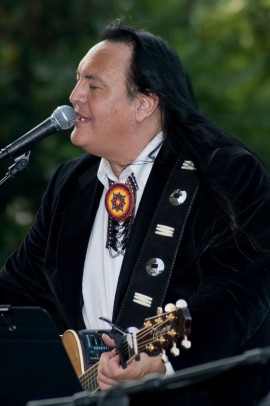 Comment by WILLA NYOKA (ADMIN) on January 31, 2011 at 10:25pm
THESE SONGS ARE VERY SURPRISING TOO. I THINK THAT I WOULD LIKE THEM. I LOVE ALL HIS SONGS THAT HE DOES. BLESSINGS TO YOU