Cats are probably the most popular of pets nowadays. Originally valued for their inbred ability to hunt various house pests such as mice and roaches, cats also offer a warm and affectionate companionship to their owners. In 1987, cats overtook dogs as the number one pet in America (about 50 million cats resided in 24 million homes in 1986) and bout 37% of American homes today have at least one cat. Domestication of cats were first believed to have originated in ancient Egypt in about 3000 BC, where cats where also revered as sacred animals. Different breeds of domesticated cats come in various sizes. Some pet owners prefer small kitten-sized ones, while some prefer large-size domesticated cat breeds.When choosing pet cats, one must consider the breeds' characteristics in addition to its size. Here are just some of the large domesticated cat breeds that are popular with cat-lovers.
The Maine Coon The Maine Coon is a native of the state of Maine in the USA where it is also the official state cat. It is one of the largest breeds of domesticated cats where the males can weigh anywhere between 13 and 18 pounds (5.9 and 8.2 kg) on average, and females between 8 and 12 pounds (3.6 and 5.4 kg). In 2006, the Guinness World Records named a male purebred Maine Coon the "Longest Cat". It measured 48 inches (120 cm) in length, from the tip of his nose to the tip of his tail, and weighs 35 pounds (16 kg). 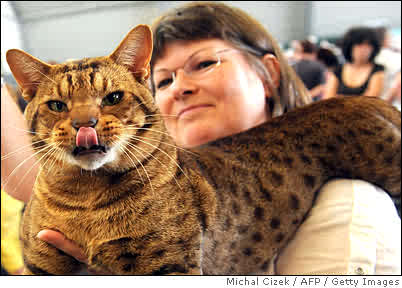 The Ragamuffin is a long-haired domestic cat. Ragamuffins are fairly large cats - females weigh between 10 to 15 pounds (4.54 to 6.80 kg), and males weigh between 15 to 20 pounds (6.80 to 9.07 kg). Ragamuffins are notable for their sweet, friendly personalities and plush, rabbit-like fur. They are adoptable as early as four months of age, but do not reach full maturity until around four years of age. The Ragamuffin is an expensive breed and costs can range from $900 - $1200 per kitten.


The Ocicat is an all-domestic breed of cat which resembles a 'wild' cat but has no wild blood. It is named for its resemblance to the ocelot, which is a wild cat. Ocicats are a very outgoing breed. They are often considered to have the spirit of a dog in a cat's body. Most can easily be trained to fetch, walk on a leash and harness, come when called, speak, sit, and lie down on command. On average ocicats weigh about 12.1 pounds or 5.5 kilograms. 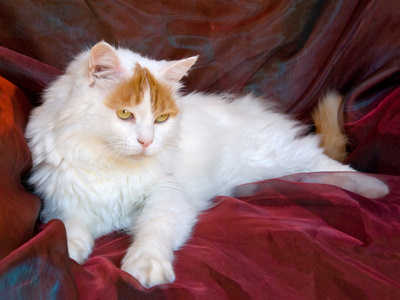 The Turkish Van is a large, semi-longhaired cat with a swimmer's body. The cat is moderately long and its back legs are slightly longer than its front legs. The coat is the most fascinating trait on this cat. The semi-long haired, water resistant single coat, is thick in winter but very soft, like rabbit fur or cashmere. During the spring and summer months when it becomes extremely hot, the long hair on the body is shed for a shorter coat that retains the cashmere feel. Male Vans grow to about 16 pounds (7.3 kg) while females tend to be a bit lighter in weight, 12 to 14 pounds (5.4 to 6.4 kg). Vans, because of their fine fur, are hypo-allergenic cats. They are considered excellent pets for those with allergies. These large-size cat domestic cat breeds are only a few of the ones available for pet purposes. It is important to take note of the qualities of the breed of cat before we decide which ones to adopt, as this would remarkably affect the way we take care of them. Knowing such could help make things a lot easier for us pet owners as we go about our endeavor in raising our pets. 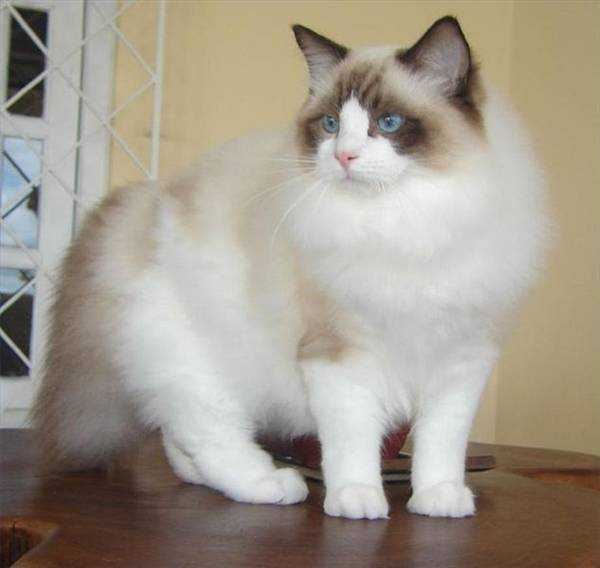 Comment by ERIC SHARP on May 27, 2011 at 8:53am
I would like to see one of Mrs Down to Earths Canadians cats I hope they are not larger than a dog though : ) you have to be big to survive the winters

Comment by ERIC SHARP on May 26, 2011 at 11:47am
Sound like lovable cat they let you know what they wand and when there not happy not getting there petting they are such characters
this one is Zippy 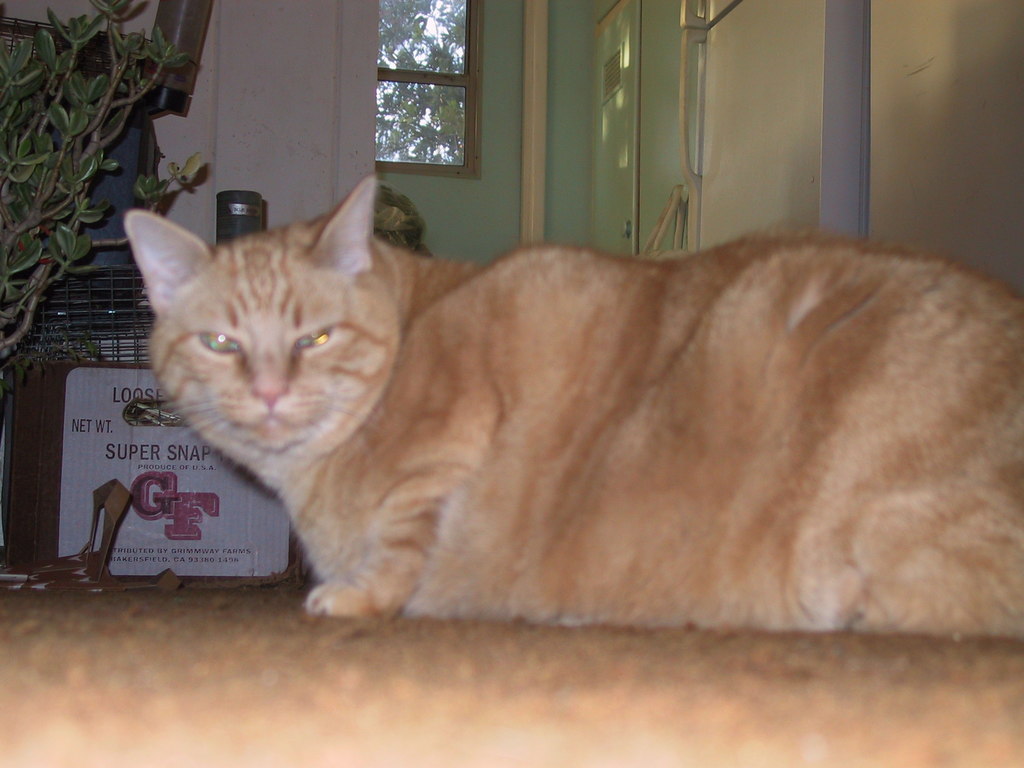 this one is Ringo 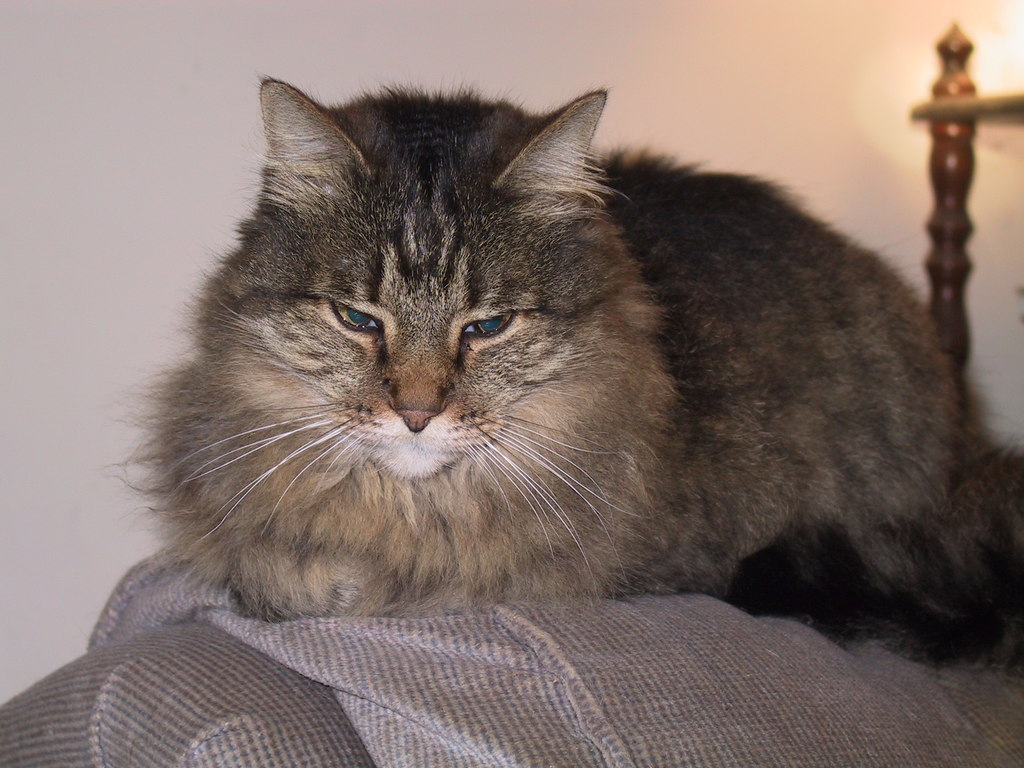 Comment by LadyHawkღ on May 26, 2011 at 8:42am
Thank you adding these beautiful pictures! Now that I've seen them I may check on the Ragamuffin to! He looks like he is quite a character!
I was looking at the weights on some of these cats and they aren't very big. I have a domestic grey one that weighs about 20 pounds.
The little orange one is my kitty and thinks he's a puppy...he follows me everywhere talking the whole time. I think he's usually asking what is for dinner.

Comment by ERIC SHARP on May 26, 2011 at 8:19am
I tried to up load the photos to this story on the Main coon cat but I had much difficulty I hope you can see the photos of these beautiful and large cats thank you.

That is a nice cat Connie is that your cat? I think wants to ignore you you must have just feed him : ) thats the way they are love you at dinner and leave you after dinner LOL

Comment by LadyHawkღ on May 25, 2011 at 11:10am
HooRay for the cat! I have 1 dog and 6 cats.
I need to check into the The Ocicat because the ocelot has always been my favorite wild one. Bet they are very expensive!
Thank you Eric for this post!
Cats Rule! Comment by Ms. Down-to-Earth on May 23, 2011 at 11:26am
Up here in Canada, we grow our cats bigger! This is so that they are better equiped to survive our winters.