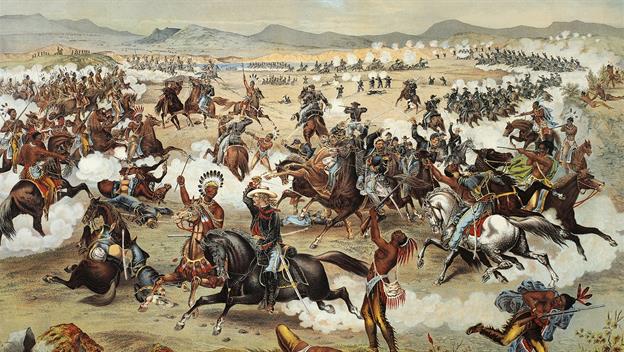 Crazy Horse and Sitting Bull, leaders of the Sioux tribe on the Great Plains, strongly resisted the mid-19th-century efforts of the U.S. government to confine their people to reservations. In 1875, after gold was discovered in South Dakota’s Black Hills, the U.S. Army ignored previous treaty agreements and invaded the region. This betrayal led many Sioux and Cheyenne tribesmen to leave their reservations and join Sitting Bull and Crazy Horse in Montana. By the late spring of 1876, more than 10,000 Native Americans had gathered in a camp along the Little Bighorn River–which they called the Greasy Grass–in defiance of a U.S. War Department order to return to their reservations or risk being attacked.

In mid-June, three columns of U.S. soldiers lined up against the camp and prepared to march. A force of 1,200 Native Americans turned back the first column on June 17. Five days later, General Alfred Terry ordered Custer’s 7th Cavalry to scout ahead for enemy troops. On the morning of June 25, Custer drew near the camp and decided to press on ahead rather than wait for reinforcements.

At mid-day, Custer’s 600 men entered the Little Bighorn Valley. Among the Native Americans, word quickly spread of the impending attack. The older Sitting Bull rallied the warriors and saw to the safety of the women and children, while Crazy Horse set off with a large force to meet the attackers head on. Despite Custer’s desperate attempts to regroup his men, they were quickly overwhelmed. Custer and some 200 men in his battalion were attacked by as many as 3,000 Native Americans; within an hour, Custer and every last one of his soldier were dead.

The Battle of Little Bighorn–also called Custer’s Last Stand–marked the most decisive Native American victory and the worst U.S. Army defeat in the long Plains Indian War. The gruesome fate of Custer and his men outraged many white Americans and confirmed their image of the Indians as wild and bloodthirsty. Meanwhile, the U.S. government increased its efforts to subdue the tribes. Within five years, almost all of the Sioux and Cheyenne would be confined to reservations.

bridget orman left a comment for Susan Hamilton
13 hours ago