On the wind-swept plains of South Dakota, you can almost imagine what life was like hundreds of years ago ... at the time when the Sioux called this land their own.

Their lives were lived close to the land and nature. Because of this, they felt all things - from the sun's rays to the smallest ant - were the work of Wakan Tanka, the Grandfather Spirit. The sun, sky and winds were all part of the Great Spirit.

The Lakota (pronounced [laˈkˣota]; also known as Teton, Titunwan ("prairie dwellers"), Teton Sioux ("snake, or enemy") are an indigenous people of the Great Plains. They are part of a confederation of seven related Sioux tribes,the Oceti Šakowiŋ or seven council fires, and speak Lakota, one of the three major dialects of the Sioux language.

The Lakota are the western-most of the three Sioux-language groups, occupying lands in both North and South Dakota. The seven bands or "sub-tribes" of the Lakota are:

Sicaŋǧu (Brulé, Burned Thighs)
Oglala ("They Scatter their Own)
Itazipco (Sans Arc, Without Bows)
Huŋkpapa ("End Village," Camps at the End of the Camp Circle)
Miniconjou ("Plant beside the Stream," Planters by the Water)
Sihasapa ("Black Feet")
Oóhenuŋpa (Two Kettles) 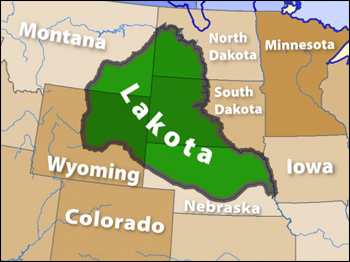 The Pawnee and the Lakota Sioux 2

"Construction of the Sweat Lodge"

You need to be a member of Lakota Culture to add comments!