Story of Manataka The Place of Peace 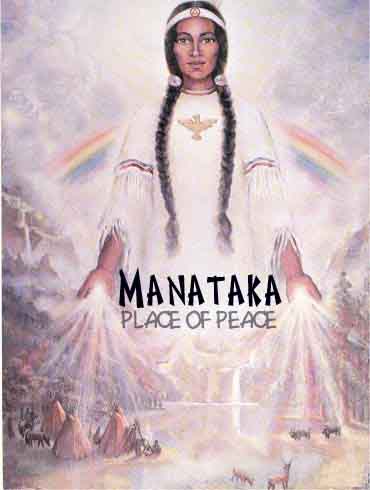 We believe the rainbow has a sacred purpose. The rainbow is a sign of the Creator's Great Blessing.

Wherever the rainbow appeared it was a place appointed by the Great Spirit ­ Creator for people to gather, especially those of differing origins and interests. It was a place where even enemies sat in peace.

It is at Manataka, under the rainbows that the nations gathered by direction of the Creator for His purpose.

Manataka is truly the place of peace for all people.

The area was a cultural and trade center for all native peoples ­ a great melting pot of American Indian culture.

The Valley of the Vapors was neutral territory unclaimed by any tribe.

The Great Spirit decreed that all that visited here were to lay down their weapons and bathe as brothers in the healing waters.

Even tribes who were hostile to each other acknowledged the truce while in the Place of Peace.
The Caddo were the dominant people in areas surrounding the valley. The Quapaw, Osage, Tunica, Natchez, Pawnee and Shawnee were nearby.
There is disagreement between archeologists, ethnologists and historians as the exact number of tribes that may have visited Manataka.
Some say there may have been 34 language groups who considered the Valley sacred ground.
In an effort to diminish any sort of future claim on Manataka, others say there were none who visited here.
Stories of the Sacred Valley of Peace still exist among some tribes today.
Other tribes, whose languages have been largely lost since the European invasion, speak of Manataka as if it were a mythical place.
In the early 1500¹s, Spanish conquistadors mounted expeditions to find the legendary spring whose magic waters could rejuvenate the elderly and heal the sick.
In 1512, Ponce DeLeon failed in his attempt to reach the mysterious hidden valley containing a crystal fountain of healing water known as the Fountain of Youth.
His fellow explorer, Hernando DeSoto was the first white European invader to enter the Valley of the Vapors in 1541.
Desoto's chroniclers wrote about the amazing sites they beheld. As far as the eye could see were hundreds of lodges representing tribes from every part of the vast continent.
The colorful dress of various groups was different from one another and they spoke many distinct languages.
Ceremonial and tribal dances were held in a central plaza, and elders sat in circles smoking the pipe.
Almost immediately after first contact, the original inhabitants began to disappear.
European invaders sacked the land, spread disease and incited inter-tribal wars that all but decimated dwindling native populations during the next two and half centuries.
After the Louisiana Purchase in 1803, white invaders began to settle in the Valley of Vapors.
In 1832, President Jackson, mastermind of the Trail of Tears and other racial atrocities, was looking for a way to totally demoralize and disorient native populations.
Jackson pushed Congress to take an unprecedented action in the nation's history by confiscating the most holy site in the American Indian world, Manataka, and making it the nation's first federal reservation.
The confiscation of Manataka by Jackson was an act contrary to the terms of the Louisiana Purchase and against the Constitution of the United States.
The United States government promised the French, Spanish and native tribes in negotiations preceding the Louisiana Purchase the federal government would not violate sacred sites.
Jackson was warned by the U.S. Supreme Court the government was prohibited by the Constitution to own land [There is still no provision in the Constitution for the government to own land].
Thus, the only legal way Jackson could accomplish the take-over was to pass a provisional law steering around treaties with other nations and the U.S. Constitution.
Jackson wanted to create the first commercial federal reservation.
As a popular president and famous Indian fighter, this was an easy task as members of Congress, of which not one of its members had ever seen Manataka, looked the other way.
For the next four decades the government allowed settlers build bathhouses and residences around the springs but in 1875 the it forced the settlers out and later began selling off choice pieces of property to selected businessmen.
What was left of the Hot Springs Federal Reservation after the ravages of the settlers and greedy government agents was turned over to the newly created national park system in 1921 and became the second national park after Yellow Stone.
Today, it is known as Hot Springs National Park, Arkansas.
Settlers and the U.S. government destroyed the sacred Circle and the seven ceremonial caves containing the Manataka Stone and other ancient artifacts gifted to Manataka by the tribes. Stolen artifacts were sold for profit by government agents.
Government bureaucrats, to cover up gross negligence of the past, claim there were never any caves on the mountain, regardless of strong evidence to the contrary.
Out of forty-seven hot water springs surviving the early onslaught of settlers, the government covered all but two small hot water display springs with metal and concrete in the name of "protecting visitors and the environment."

Actually, the reason is to control the sacred waters for profit. They pump the waters to private bathhouses and hotels where it can be sold. rehearsing an arrangement of « Magic » by Olivia Newton-John. recorded in july 2019. ❤ thank you for your support ! ❤ § you're invited to subscribe to the ★ Monthly Release Club ★ to instantly get every composition i release, along with Club…
16 hours ago
0 Comments 0 Likes