Ted Williams reunited with his mother.

This is one of those heartwarming...bring tears to your eyes stories. I wish him all the best.
LadyHawkღ


Kleenex is going to have a very good day. Ted Williams, the homeless man with a golden voice, was finally reunited with his mother Thursday in a supremely emotional exchange that was delayed because of two feuding morning shows and their cutthroat quest to capture the moment.

In the end, The Columbus Dispatch, which introduced Williams to the world, was the first outlet to post video showing the moment when he and his mother, Julia Williams, reunited for the first time in 20 years. 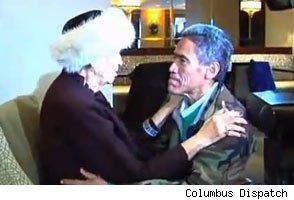 Williams, wearing the same Army jacket he had on in the Dispatch's original roadside video, clutches his 90-year-old mom as she rejoices, "My prodigal son has come home."

When she tells him, "Please don't disappoint me," he responds, "I'm not, Mom, I'm not. I'm through with it all. Mother, I love you so much."

The reunion should have happened earlier, but conflicts between NBC and CBS held things up.

A 'Today' producer told the Dispatch that Williams and his mom had been booked for NBC interviews on Thursday, but CBS swooped in and intercepted her.

"They held her up so we couldn't do the reunion," said the producer, who spoke on the condition of anonymity. They claim that CBS wanted no contact between mother and son until their morning shows had concluded.

A CBS spokeswoman called that account "a complete fabrication."

"When NBC learned of our intentions to bring Julia to the airport (Wednesday night) to meet her son, they told us that they would not let them reunite even if it meant keeping Ted and Julia apart for days and that the reunion had to happen live on their show -- and that's exactly what they did. They snuck him off the plane into a van and away from the airport in order to avoid his mother."

CBS brought Julia Williams to La Guardia Airport on Wednesday night, but Ted "was whisked away by another media outlet" before the two could meet eyes.

"I was waiting for you to get off that plane," Julia told her son during their meeting Thursday.

Ted aired his concern about his mother's safety during the media swarm. "I thought they kidnapped you. I thought these people thought this whole experience was worth some money to them."

He then tells her how certain individuals, possibly news and TV producers, began contacting him to extract information on her.

"People in Columbus were saying, 'What's your mother's name? Where does she live? We wanna go pick her up. We wanna do this, that or the other.' And I was scared because anybody could have come in and said, 'I'm from whatever and ride with us,' and take you away. And then when that woman wouldn't let me speak..." Williams' statement ends there, and the raw footage from the Dispatch then cuts to another part of the conversation.

Williams has stuck with NBC for his appearances since coming to New York, having made a memorable debut on 'Today' and later doing voice-over work for MSNBC and Kraft Foods (a Mac & Cheese commercial). He capped off his busy day of work with an appearance on 'Late Night With Jimmy Fallon.'

Williams, a Brooklyn native, became an online sensation just this week when The Columbus Dispatch posted a video of him demonstrating his voice-over skills by the side of the road.

Permalink Reply by Gloster Gal on January 8, 2011 at 12:05pm
This was a story on our U.K. news channels too.....it really does your heart good and my faith in human nature has been restored (somewhat)

Permalink Reply by LadyHawkღ on January 8, 2011 at 12:17pm
LOL, I agree with the "somewhat" but there's always hope! I'm glad one of the first things they did was get him some councelling to deal with all of this. Kind of shady what they did in reuniting him with his Mother but it worked out.

Sharikee replied to Sharikee's discussion All I Want For Christmas Is !!!COOKIES!!!
4 hours ago