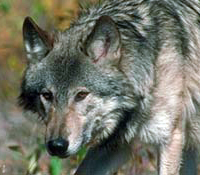 On August 5, 2010, a federal judge overturned a decision by the U.S. Fish and Wildlife Service (FWS) to remove gray wolves from the Endangered Species Act (ESA), paving the way for these critical predators to rebuild their numbers to
ecologically sustainable levels. This ruling is the result of a lawsuit
brought against the FWS in 2009 by Defenders of Wildlife and other conservation
organizations.

"This decision is a significant victory for wolves, for the integrity of the Endangered Species Act, and for all Americans who care deeply about conservation,” said Rodger Schlickeisen, president of Defenders of Wildlife.
“The court’s ruling makes it clear that decisions under the Endangered Species
Act should be based on science, not politics.” 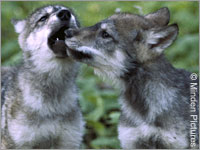 This victory is the culmination of efforts by the Defenders legal team, on-the-ground work of our staff and volunteers and ongoing support from our dedicated and passionate conservation activists. Our supporters have sent
hundreds of thousands of messages to federal and state government officials and
attended critical hearings to ensure scientifically sound wolf management
legislation and regulations.

Under the Gun for Political Gain
After Defenders of Wildlife led efforts to restore the gray wolf population in the Northern Rockies in 1995, this great success
was dealt a serious setback when Interior Secretary Ken Salazar approved a plan
from the Bush administration era to delist gray wolves from the ESA. Once off
the list, the wolves were quickly approved for hunting in Idaho and Montana,
where more than 350 wolves—almost 20% of the total population—were killed in
2009.

Defenders at Work
Defenders of Wildlife is a national leader in efforts to save America’s wolves. In addition to suing the government to relist the species, we’re working
proactively with livestock owners to prevent conflicts, countering anti-wolf
rhetoric in the media and mobilizing activists in support of a science-based
approach to wolf management.

What’s Next for the Wolves
One of the immediate impacts of the ruling is that the hunting seasons in Montana and Idaho, originally planned to begin this fall, will be canceled.

While this court ruling is a great win for wolves, many challenges remain. There will undoubtedly be some people who oppose this decision. Defenders will continue to work hard in all our efforts mentioned above to ensure the wolves
have a lasting future in the region.

At a broader level, we also need a new approach to delisting endangered species so similar ill-advised decisions can be avoided in the future. Our wildlife’s survival cannot be left to the whim of short-term political
goals.

Defenders is committed to the long-term survival of the Northern Rockies wolves and other imperiled wildlife. We will continue to work in the field, in the courts and in Washington to ensure healthy, interconnected populations and
ecosystems.

WILLA NYOKA (ADMIN) commented on Thomas Goldenheart's blog post The Virus, Is It A Message?
yesterday