Challenger Disaster 25th Anniversary: Where Were You?

Just 73 seconds after liftoff from the Kennedy Space Center, on the unusually cold Florida morning of Jan. 28, 1986, things went horribly wrong for the space shuttle Challenger.

And two minutes later, with some or all of its seven crew members still possibly conscious, the craft slammed into the Atlantic Ocean seven miles off the coast. Challenger, and the remains of its occupants, would not be retrieved for weeks.

Images of smoke and flames visible against a crystalline sky were replayed over and over from that day forward. So were NASA promo clips of the crew floating weightlessly during training and posing for their official portrait in baby blue flight suits, proudly holding their helmets.

On the night of the tragedy, after postponing his State of the Union address, President Ronald Reagan spoke somberly from the Oval Office. He directed some of his words to the schoolchildren who had watched a closed-circuit NASA telecast of what should have been the triumphant launch of a crew that included the first "teacher in space."

"I know it's hard to understand, but sometimes painful things like this happen. The future doesn't belong to the faint-hearted; it belongs to the brave," Reagan said. "The Challenger crew was pulling us into the future, and we'll continue to follow them."

"I hate the phrase 'perfect storm,' but that's what we had for Challenger," says Sally Karioth, a nursing professor at Florida State University who specializes in grief and trauma. "It was a televised event that involved the entire country. We had this cute little curly-headed teacher in that blue astronaut outfit, and we had dragged in every kid in America to write her letters before the launch, so it was like Christmas Eve. Then it blows up in the sky and that's the Grinch," Karioth told Politics Daily from her home in Tallahassee, Fla.

This was not the way it was supposed to happen.

"Reach for the stars" was almost a McAuliffe mantra to her high school social studies classes in Concord, N.H. Those words made the loss all the more poignant.

Though she was, by all accounts, genuinely down-to-earth -- someone you'd want living next door or marrying your big brother -- McAuliffe had also become an educational rock star, besting more than 11,000 others to become the first teacher in space. All 10 finalists were at the White House for the July 1985 televised ceremony in which Vice President George H.W. Bush announced McAuliffe's selection.

"She made everybody feel kind of good about themselves; she made the schoolchildren learn as much as they could and she taught them how important they were. That was what she was striving to do," recalled her mother, Grace Corrigan, 86, who still lives in Christa's hometown of Framingham, Mass.

Was McAuliffe at all frightened by the prospect of space travel? "Not a bit. She was just so excited. She was thrilled to be going on the trip of a liftime," Corrigan told Politics Daily.

"We have all these adults horrified by what looks to millions of little kids like a fireworks display," said Karioth. "The adults became responsible for explanations to the children at a level the kids could understand, when in fact the adults couldn't understand it themselves."

One of those mystified grownups was then-Rep. Bill Nelson, D-Fla., who just 10 days earlier had returned from the ultimate congressional junket, a seven-day mission on the space shuttle Columbia. He had requested and trained for celestial travel because the Kennedy Space Center was in his district.

Nelson was in his Capitol Hill office explaining the second-by-second Challenger launch to staffers when the craft seemed to explode.

"At that point, Challenger was the 25th flight in the shuttle program, which was still in its infancy, and it had come to symbolize America's technical prowess," Nelson, now a U.S. senator, told Politics Daily. "Suddenly it disintegrated in front of everybody's eyes on the TV screen. It wasn't that NASA had taught the American people that shuttle travel was so routine, it is what the American public had come to think because it had all gone off so flawlessly."

The presence of two vibrant, successful women among five male crew members also added to the nation's profound sense of loss, said retired Rep. Don Fuqua, another Florida Democrat, who at the time chaired the House Science and Technolgy Committee.

"We expect men to get killed in airplane crashes, in space flight, but not women. Of course no one likes to see anyone get killed, but Judy Resnik and Christa McAuliffe were young, they were accomplished, they were dedicated and there was just so much excitement about the whole teacher in space program. Christa McAuliffe was someone everyone could relate to," Fuqua told me.

The evolution of the media also played a large role in making Challenger such a national tragedy, he explained. Forty-four years ago Thursday, on Jan. 27, 1967, when three Apollo 1 astronauts died in a fire that swept through their rocket cockpit during a test on the launch pad, there were no TV crews to record and replay the disaster. "I knew all three of those guys," said Fuqua: Virgil "Gus" Grissom, Roger B. Chaffee and Edward White.

In 1986, CNN -- then the country's only 24/7 news operation -- carried the Challenger launch live. "Pretty soon it was all anyone saw on any channel you turned on," said Fuqua.

A blue-ribbon commission studied the causes of the disaster, with all shuttle flights grounded for 32 months while answers were sought and fixes made. Factors contributing to the Challenger explosion were long-standing design flaws in the O-rings made by contractor Morton Thiokol, and the unheeded fears of the firm's engineers about the potentially fatal outcome of launching in such cold weather.

Since the report's release and implemention of safety suggestions, there have been more than 110 subsequent shuttle flights -- and a second disaster, when Columbia disintegrated over Texas. The eighth anniversary of that Feb. 1, 2003 accident, which claimed another seven-member crew, falls next Tuesday.

The shuttle program is winding down even as these three grim commemorations bump up against one another. Astronaut Mark Kelly -- whose wife, Rep. Gabrielle Giffords (D-Ariz.) was severely wounded in the Tucson shooting spree that killed six and injured a dozen others Jan. 8 -- was set to command the Endeavour's last flight in April. He has since requested a back-up commander should he need to remain on terra firma to help his wife recover.

NASA's 135th and final space shuttle flight for the orbiter Atlantis is currently scheduled for June 28.

"It was such a crushing blow to us that these loving people wouldn't be remembered for how they lived," said June Scobee-Rogers, widow of mission commander Dick Scobee in an interview with Florida Today. She will not mark the 25th anniversary at Arlington Cemetery, but at one of the nearly 50 Challenger education centers that have been established throughout the country.

Tonight, on the eve of that tragic flight, Grace Corrigan will go to the Christa Corrigan McAuliffe Center for Education and Teaching Excellence where eighth graders from the McAuliffe Regional Public Charter School will present their space science projects.

"By my last count, there are 40 or 42 schools in the United States named for her and another three outside the country," said Corrigan. "Her legacy is ongoing." 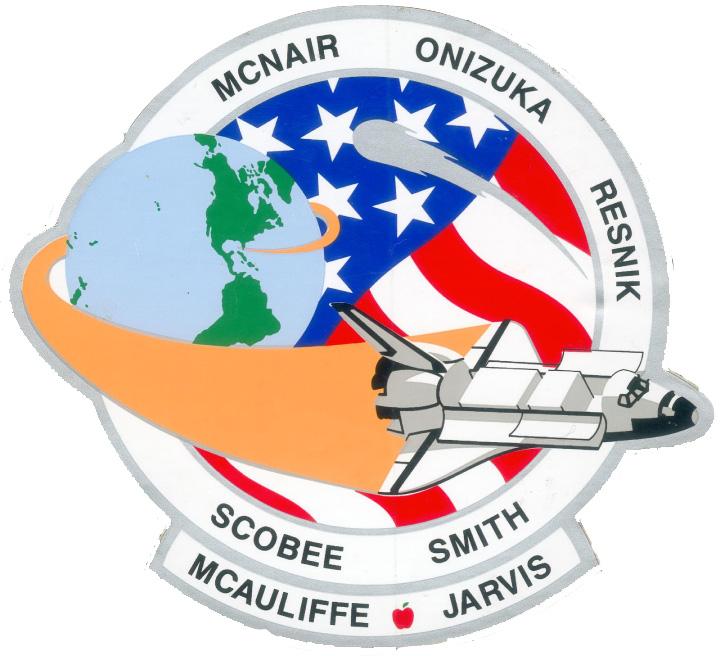 Permalink Reply by Gloster Gal on January 28, 2011 at 4:20pm
I remember this so well. I was in England and watching it on TV. I had seen one of the launches when I visited my son in Orlando in 1992 and we went to see the launch from across the river. It is something that will live in my memory forever and I pray for all those who take part in these endeavours.

Permalink Reply by Ms. Down-to-Earth on January 29, 2011 at 12:40pm
I was in grade 10. I even remember which hallway I was walking in when I heard of the news over the P.A. system. I was absolutely horrified when I found out that the astronauts were conscious when the Shuttle slammed into the water.