SOME OF THE WAYS OF THE DELAWARE INDIAN WOMEN

SOME OF THE WAYS OF THE DELAWARE INDIAN WOMEN

Introduction
The Lenape or Delaware Indians originally lived along the East Coast, occupying most of New Jersey, eastern Pennsylvania, and northern Delaware. The lands in the East were lost through deceit and aggression and the Lenape people began a gradual movement westward. Unlike the Cherokee who were moved westward in one sweep, the Lenape were settled and resettled; at various times living in Ohio, Indiana, Missouri, and finally for thirty-six years in Kansas. Pressure was again applied and the Lenape were forced into Indian Territory, and most of the traditional people settled in the area that is presently Washington County, Oklahoma.

The subject of this brief paper is the Lenape or Delaware Indian women and their place in Indian life, but before going into some of the specifics of daily life, it should be pointed out that the role of women in Lenape life was entirely different from that of the European cultures. The Lenape are matrilineal which means that everything descends down from generation to generation through the female line. The children belong to the clan or group of the mother, and therefore, even if one was the son or daughter of a chief, they would not be a prince or princess as was the case with European royalty. The successor to the chieftaincy was the chief’s sister’s son, or the nearest male relative to the chief within the same clan. This gave the women a powerful voice in tribal matters, but in spite of this ‘voice,’ it was the tradition for women to not speak out at public gatherings such as councils. If a woman had a point to make she would have a male relative or her husband state her opinions for her. Unlike the women in the cultures of many of the Europeans who came to these shores, the Lenape wife was never considered as the property of the husband. Women’s roles among the Lenape were clearly defined: the woman had full charge of the home; in fact, she was considered the owner of the house. The woman took care of the food preparation and the man procured the game animals. The woman took care of planting and the garden and the man cleared the land for the gardens. 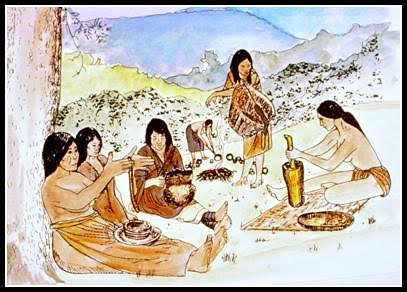 The Delaware Indian women had a reason for most of the things they did. Even with cooking, we think that the person’s mind when they are cooking has something to do with the health of the ones who eat the food. The cook must be in a good frame of mind during the food preparation, not angry, or ill, and have an inside prayer to the Creator that what she prepares will bring strength and happiness to the consumer of the food. Sewing likewise is not done when one is angry lest the wearer will feel unhappy when wearing it. They will feel the “makers” sensations.

Delaware women, especially when we cook outside such as when we camp out, we bend from our waist down to stir our pots. Usually a white woman will stoop down on her knees to attend her cooking pot. That is one of the differences that I see. Then too we old traditional people have a habit of pointing with our lips. Like you say, “Well, right over there,” and we point that direction with our lips. But you don’t point at people. And neither do you point at graves.

The children in a Lenape family were cared for by both parents, although some of the time the father was gone hunting or fishing as this was necessary for survival, it was not for sport as is usually the case these days. In the traditional families the children were spaced about three to four years apart, and the women usually nursed their children until they were about three years old.

In the Delaware tribe the women disciplined children in the old way. They didn’t really use any whips or any paddles or anything. They were taken to the creek, and a basket put over their head and water thrown over that basket. The Lenape said that there is a grandfather spirit in this water will correct all your bad habits, and this water will take away all these obstinate traits you might have. There is another way to correct children. You tell the child that, “Your conduct, your action, brings shame to me and all the people who are gone, you bring shame upon them.”

The woman had the freedom to do as she pleased, and she might ask her husband if he wanted to go to some certain place, but if he did not she would just take the children and go, such as to town or to a dance, (most of our dances do not require a partner). Some women also had a special man friend, a non-relative called by the term usually reserved for a female friend, and he served the purpose of a confidant. It was to him she would go with questions or problems she could not discuss with her husband or male relatives.

This account shows just a few of the many facets of the life of a woman among the Lenape people. Most of the older ways have about disappeared among the younger generations as they grow up among the non-Indians, and learn many of their ways in the schools, all too often overlooking the ways of their ancestors.