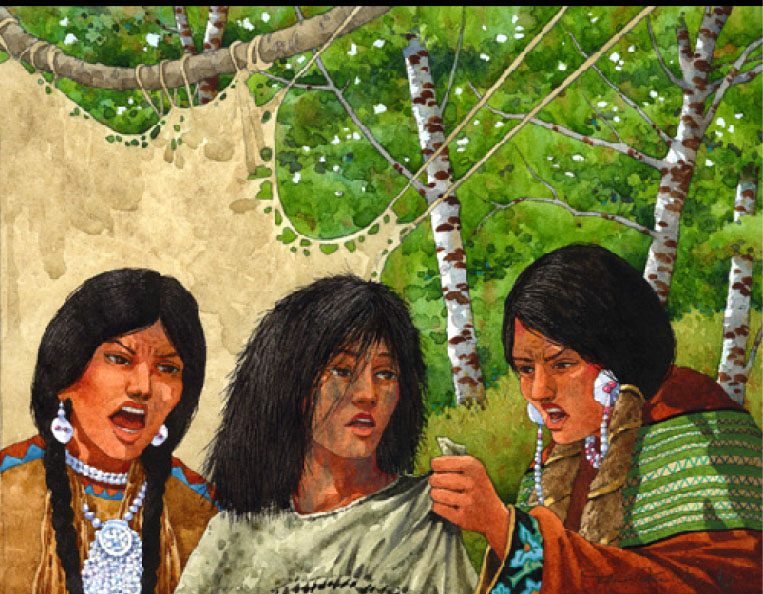 Permalink Reply by Sharikee on July 31, 2015 at 4:10pm
The Native American Cinderella

On the shores of a wide bay on the Atlantic coast of what is now called Canada there dwelt a great Native American warrior, known for his wondrous deeds. He had a very wonderful and strange power -- he could make himself invisible. In this way he could mingle unseen with his enemies and listen to their plots. He was known among the people as Strong Wind, the Invisible.

Strong Wind dwelt with his sister in a tent near the sea, and his sister helped him greatly in his work. Many maidens would have been glad to marry him, and he was much sought after because of his mighty deeds. It was known that Strong Wind would marry the first maiden who could see him as he came home at night. Many made the trial, but it was a long time before one succeeded.

Strong Wind used a clever trick to test the truthfulness of all who sought to win him. Each evening as the sun went down, his sister walked on the beach with any girl who wished to make the trial. His sister could always see Strong Wind, but no one else could because he made himself invisible to all but her. And as he came home from work, his sister would see him drawing near, and she would ask the girl who sought him, "Do you see him? Do you see my brother?" And each girl could not see him but wanted to win the hand of Strong Wind, and so would falsely answer, "Yes." His sister would then ask, "With what does he draw his sled?" And each girl would answer, "With the hide of a moose," or "With a pole," or "With a great cord." And then his sister would know that they all had lied, and their answers were mere guesses. Many tried and lied and failed, for Strong Wind would not marry any one who was untruthful.

There lived in the village a great chief who had three daughters. Their mother had long been dead. One of these was much younger than the others. She was very beautiful and gentle and well beloved by all, and for that reason her older sisters were very jealous of her charms and treated her cruelly. They clothed her in rags so she would look ugly, and they cut off her long black hair, and they burned her face with coals from the fire so that her skin would become scarred and disfigured. They lied to their father, the chief, telling him that she had done these things to herself. But the young girl was patient and kept her gentle heart and went about her work.

Like other girls, the chief's two eldest daughters wanted to marry Strong Wind. One evening, as the sun went down, the oldest daughter walked on the shore with Strong Wind's sister and waited for his coming. Soon he came home from his day's work, drawing his sled. His sister asked as usual, "Do you see him? Do you see my brother?" And the oldest daughter, lying, answered, "Yes." And she asked, "Of what is his shoulder strap made?" The girl, guessing, said, "Of rawhide." And Strong Wind knew that the oldest daughter had lied, and he kept himself from her sight, and she went home dismayed.

The second daughter, too, tried to win Strong Wind. She walked along the shore with Strong Wind's sister, and when the sister asked her if she saw Strong Wind she, too, lied, saying, "Yes". When she was asked of what his shoulder strap was made, she guessed, "Of woven grasses." And so she was also denied by Strong Wind.

One day the chief's youngest daughter with her rags and her burnt face resolved to seek Strong Wind. She patched her clothes with bits of birch bark from the trees as best she could, and put on the few little ornaments she possessed, and went forth to try to see the Invisible One as all the other girls of the village had done before. Her sisters laughed at her and called her a fool. As she passed along the road, all the people laughed because of her tattered frock and her burnt face, but silently she went her way.

Then Strong Wind's sister knew that because the girl had spoken the truth, her brother had made himself visible to her. She said, "Truly, you have seen him."
And she took the girl home and bathed her, and all the scars disappeared from her face and body; and her hair grew long and black again like the raven's wing; and she gave her fine clothes to wear and many rich ornaments. Then she bade her to take the wife's seat in the tent. Soon Strong Wind entered and sat beside her, and called her his bride.

The very next day she became his wife. Ever afterwards she helped him to do great deeds. The girl's two elder sisters were very cross and they wondered greatly at what had taken place. But Strong Wind, who knew of their cruelty, resolved to punish them. Using his great power, he changed them both into aspen trees and rooted them into the earth. Since that day the leaves of the aspen have always trembled, and they shiver in fear at the approach of Strong Wind, it matters not how softly he comes, for they are still mindful of his great power and anger because of their lies and their cruelty to their sister long ago.

PITA SIKSIKA WARRIOR left a comment for timotei
13 hours ago