Permalink Reply by Sharikee on July 1, 2022 at 9:23am
The indigenous peoples of the Pacific Northwest Coast were composed of many nations and tribal affiliations, each with distinctive cultural and political identities; but they shared certain beliefs, traditions, and practices, such as the centrality of salmon as a resource and spiritual symbol. These nations had time and energy to devote to the establishment of fine arts and crafts and to religious and social ceremonies. The term “Northwest Coast” is used to refer to the groups of indigenous people residing along the coasts of British Columbia, Washington State, parts of Alaska, Oregon, and northern California.

The Pacific Northwest Coast at one time had the most densely populated areas of indigenous people. The mild climate and abundant natural resources, such as cedar and salmon, made possible the rise of a complex aboriginal culture. The indigenous people in this region practiced various forms of forest gardening and fire-stick farming in the forests, grasslands, mixed woodlands, and wetlands, ensuring that desired food and medicine plats continued to be available through the use of advanced farming techniques. Those involved in agricultural development would create low-intensity fires in order to prevent larger, catastrophic fires and sustain low-density agriculture in a loose rotation. This is what is known as permaculture, or any system of sustainable agriculture that renews natural resources and enriches local ecosystems.
One of the major cultural elements that began to flourish on the Pacific Northwest Coast was the use of music and other forms of arts and crafts. Although music varied in function and expression among indigenous tribes, there were cultural similarities. For example, some tribes used hand drums made of animal hides as their instrument of choice, while others used plank or log drums, along with whistlers, wood clappers, and rattles. However, regardless of the type of instrument used, music and song were created to accompany ceremonies, dancing, and festivities.

The principal function of music in this region was to invoke spirituality. Music was created to honor the Earth, the creator, ancestors, and all other aspects of the supernatural world. Songs were also used to convey stories and sometimes were owned by families like property that could be inherited, sold, or given as a gift to a prestigious guest at a feast. Professional musicians existed in some communities, and in some nations, those who made musical errors were punished, usually through shaming. Vocal rhythmic patterns were often complex and ran counter to rigid percussion beats.

As with music, the creation of art also served as a means of transmitting stories, history, wisdom, and property from generation to generation. Due to the abundance of natural resources and the affluence of most Northwest tribes, there was plenty of leisure time to create art. Many works of art served practical purposes, such as clothing, tools, weapons of war and hunting, transportation, cooking, and shelter. Others were purely aesthetic. Art provided indigenous people with a tie to the land and was a constant reminder of their birth places, lineages, and nations. One example of this is the use of symbols on totem poles and plank houses of the Pacific Northwest coast.
Other cultural elements that became established were the religious and social ceremonies of the Pacific Northwest nations. Although various tribes might have had their own different mythologies and rituals, “animism” is said to describe the most common, foundational thread of indigenous peoples’ spiritual or supernatural perspectives in this region. Spiritualism, the supernatural, and the importance of the environment played such integral roles in day-to-day life. Therefore, it was not unusual for worldly goods to be adorned with symbols, crests, and totems that represented some important figure(s) from both the seen and unseen worlds.

Many of these religious or spiritual symbols would be present during social ceremonies as well. The potlatch, a gift-giving feast, was perhaps one of the most significant social experiences that occurred within Pacific Northwest groups. It was a highly complex event where people gathered in order to commemorate a specific event such as the raising of a totem pole or the appointment/election of a new chief. In the potlatch ceremony, the chief would give highly elaborate gifts to visiting peoples in order to establish his power and prestige, and by accepting these gifts, the visitors conveyed their approval of the chief. There were also great feasts and displays of conspicuous consumption. Groups of dancers put on elaborate dances and ceremonies. Watching these performances was considered an honor. Potlatches were held for several reasons: the confirmation of a new chief, coming of age, tattooing or piercing ceremonies, initiation into a secret society, marriages, the funeral of a chief, or a battle victory. 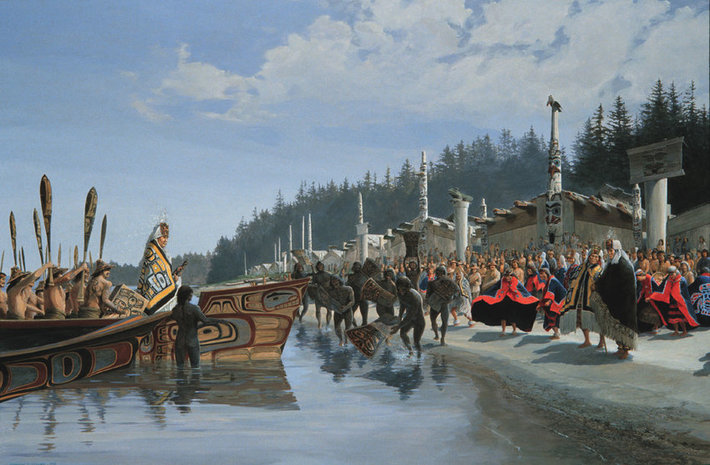 Permalink Reply by Sharikee on September 10, 2022 at 8:45pm
The First Peoples of California

The Spaniards, of course, were hardly the first to discover this land of wonder and extremes. The earliest Californians were adventurous Asians who made their way across the Bering Straits to Alaska thousands of years ago when a warmer climate and a now-vanished land bridge made such travel easier. These men and women and their descendants settled North and South America, spreading out to form the various nations and tribes whom the first European visitors to this hemisphere dubbed "Indians." The mountain ranges of the Pacific Coast isolated these early settlers from the cultures that developed in neighboring Mexico and the western United States. Thus, the early population of California bore little physical resemblance to the Native Americans of the Great Plains and apparently shared no ties of language or culture with these nations. California's rugged topography, marked by mountain ranges and deserts, made it difficult for her indigenous groups to travel great distances, and the region's native peoples were even isolated from each other, tending to live in large family groups or clans with little political structure, unlike the larger tribes and nations to the east. As European settlement came late to California, her natives were also denied access to the newcomers' horses, whose runaways fathered the wild herds that gave Great Plains tribes new mobility as early as the sixteenth century. Thus divided and isolated, the original Californians were a diverse population, separated by language into as many as 135 distinct dialects. Tribes included the Karok, Maidu, Cahuilleno, Mojave, Yokuts, Pomo, Paiute, and Modoc. On the other hand, the mountains that divided the groups made extensive warfare impractical, and the California tribes and clans enjoyed a comparatively peaceful life.
The region's lack of rain during the growing season meant that agriculture was not a practical means of livelihood for early Californians, but the gentle climate and rich soil enabled these groups to live by skillfully harvesting and processing wild nuts and berries and by capturing the fish that crowded the streams. The acorn, leached of toxic acids and turned into meal, was a staple of the diet of most California native peoples. Indeed, the first English-speaking Europeans to encounter California Native Americans were so struck by their focus on gathering nuts from the ground and unearthing nutritious roots that they nicknamed them "Diggers," and "Digger Indian" became a vague nickname for many of the groups.

An ample food supply, temperate climate, and absence of wars contributed to a large, healthy population. It has been estimated that when Europeans first came to California, the native population was probably close to 300,000--13 percent of the indigenous peoples in North America. RichardtheRaelian left a comment for CorkScrew Turtles
8 hours ago

Sharikee left a comment for Ms. Down-to-Earth
15 hours ago